No, we haven't fallen off the face of the earth. We are just experiencing a complete lack of internet access. I hope it will be resolved soon as I have lots of cool plant-dyed fleece to show off.
Posted by Robyn at 3:25 PM 1 comment:

Can You Stand It?

A CD with photographs of The Knitted Mile just arrived from Shannon Stratton, one of the curators of Gestures of Resistance. Her photos were so different from mine (given that she was photographing while I was laying the piece down on the road), that I feel I must post just a few here. I don't care what the naysayers say, looking at the photographs brought back to me just how lovely, poignant, funny, strange it was that cold morning in Dallas. 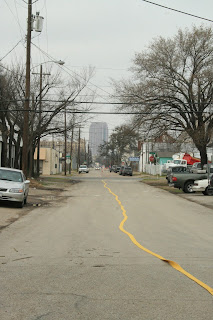 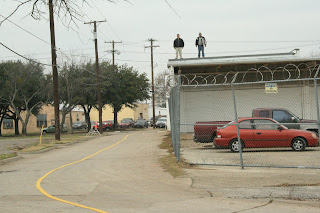 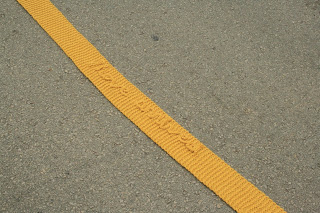 Rather than bore you to tears with tales of packing and racing around trying to pretend that all the loose ends of a life can be tied up neatly in a couple of days, I will share something completely different. Browsing through some blogs, I came across one by a person who lives in Sunnyside: Reading Is My Superpower. I love that name. Anyway, she listed her top twenty all-time favorite books of fiction. While I liked her list, I think I have some differing ideas, although I also realized that I have a very hard time coming up with twenty books. So, here is my list of my ten all-time favorites:

1. Middlemarch by George Eliot. There simply is no better book ever written. Sorry, but it's true.

After this they are in no particular order of favourite-ness.

2. Bleak House by Charles Dickens (I also recommend the BBC dramatization of this book)
3. Stuart Little by E.B. White (actually, just about anything by E.B. White)
4. Zen Mind, Beginner's Mind by Shunryu Suzuki (not really fiction but a very good book)
5. Austerlitz by W. G. Sebald
6. Moby Dick by Herman Melville
7. A Handful of Dust by Evelyn Waugh
8. The Grey Islands by John Steffler
9 and 10. The whole series of books by Ngaio Marsh, P.G. Wodehouse and Dorothy Sayers

I never realized I was such a literary Anglophile until just now.

And there is a whole category of books that are only eluded to in that list and this is, novels written for ages 9-12: The Melendy stories, The Wheel on the School, From the Mixed Up Files of Mrs. Basil E. Frankweiler. I could go on.

What's your list? Patti? Shawn? I would ask Helen but I know she doesn't like that.
Posted by Robyn at 10:36 AM 5 comments: 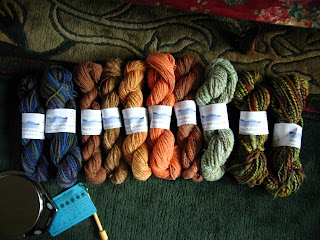 Here is my very first order of yarn being sent to the Craft Council shop in St. John's. Actually it is part of the order--the rest will be shipped after we get to Gillams (and I spin it up!). It takes a bit of work to prepare it to be sent. Besides the dyeing and spinning part, I need to measure the yardage, which I can do fairly easily because each wrap around my niddy noddy is equal to two yards. I just count up the strands and double it. Then I weigh the skein and finally I measure the number of wraps/inch. This allows me to say with certainty what the weight is (worsted, DK, bulky, etc.). All that information gets written on the label, which is wrapped around the yarn and taped. Now it is ready to go.

Some of the skeins are newly spun and some had been listed in my etsy shop for several months but had not sold. I have discovered something about selling on etsy--it is harder to sell yarn that is more subtle in its colouring. I have a couple of skeins of yarn that I think are gorgeous but somehow the photographs don't do it justice and it just doesn't leap off the screen at you. I have faith that people looking for yarn at the shop will be able to recognize its beauty in person.

I wish them farewell with the knowledge that we will arrive on the island at about the same time, albeit on different coasts
Posted by Robyn at 4:47 PM 2 comments:

You Must Be Mistaken

Over at Enchanting Juno, she got talking about stash and that led to talking about being open to making mistakes and forging ahead anyway.

Yesterday, I watched this video about education and creativity. It wasn't anything new to this unschooler but lovely to hear and to feel the reinforcement of ideas that are so often seen as going against the tide or just plain crazy. One of the speaker's main points was that children are not afraid of mistakes: they just go with it and correct as they go and sometimes they come up with something great. He was saying that creativity is about not fearing mistakes.

I am a lucky person - my stock and trade is creativity. As someone once said, you become an artist because it is impossible to do anything else. And if you can do something else, do it! You will be much happier (I would add, and richer and have less stuff cluttering your house). I think the idea that one would be happier NOT being an artist is related to the way mistakes go hand in hand with creativity.

Mistakes are funny things, really. I remember, back in my painting days, knowing in my gut from the first brush stroke - the very first one! - whether or not a painting would work or would suck. And those paintings that were doomed from brush stroke one were so infuriating every time because, every time, I would keep going, knowing that it sucked but believing I could make it right. No amount of paint applied and removed could ever fix it. I know other painters who have described the same experience. Now that I am no longer painting, I have had the experience knitting. Not exactly from the first stitch, but definitely from the first row, I know that the piece just isn't right . I keep adjusting and convincing myself that somehow I can make it work but really I should just chuck it and start something else.

So why do we persist, even when all the signs are clear that this one is doomed? I wonder if this is how George Bush feels about his Iraq caper? He started it, it sucked from the very first moment, but he is sure, sure!, that if he just adjusts this and twists that, it will all work out in the end.

Unlike Bush's war, a failed painting or knitting project is something we can laugh about eventually. We can try again, start fresh or, even better, transform the mistake into something unexpected and new and wonderful. And that's the beauty of mistakes and creativity. It is the only way, the only painful, humbling, irritating way to inch towards something new.
Posted by Robyn at 9:53 AM 1 comment:

The Pressure Is On

We are winding things up here in NYC and we are casting our thoughts northward. Every year at this time I start to have regrets and doubts about what I am doing and why. Suddenly there are 1000 fascinating things happening here that we will miss and the idea of shifting households seems overwhelming. Meanwhile, I reviewed our next week's calendar and I don't really see a group of hours in which to pack and, oddly enough, Wee Ball Yarns has suddenly become popular in a very modest way but enough that I am wondering when I will be able to squeeze in some serious spinning time. My cup is spilling over. Big time. This mad rush of activity mingled with anxiety happens every year. Yet, somehow, as soon as we get past my mom's house in Massachusetts, which is the usual northern limits of our Sept - May travels, the adventure begins and the excitement of another season in Newfoundland takes hold. That first grilled cheese sandwich with a side of fries is the signal: Newfoundland here we come!
Posted by Robyn at 10:22 AM No comments:

That phrase is a saying I heard spoken by Australian guy I met in Rome in 1986 and it has stuck with me ever since. I even used it as a the title of a piece I made in which I covered a sitting room in knitwear. But it comes back to me now because of this item: 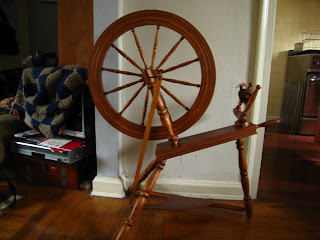 Isn't it lovely? I thought so too when I saw the ad on craigslist. A spinning wheel for $50! Great!, I thought, I'll buy it and give it away to someone who has been dying for a wheel. I knew it was old and therefore not a great production wheel, but for $50, who cares. Someone out there needs a wheel and I was prepared to give it to them.

I drove out to NJ to pick it up on Saturday morning. The woman who was selling it only knew that it belonged to her grandmother for at least 50 years. She was thrilled it would find a happy home with someone who could use it. She almost forgot to even take the money for it.

It is at this point that a certain surprise registered with me at how light the spinning wheel was. I have two wheels and they both, while not heavyweights, are substantial enough that I don't enjoy carrying them around much further than from my dining room to my living room i.e. about 5 feet. This one I could lift with one hand. Hmmmmm....

Nevertheless, I got the wheel home and excitedly put a drive band on it (there was none), happily noting that it was a double drive. Cool. I eagerly whipped out a bit of roving and sat down. It was squeaky, but no problem, a little oil will fix that in a jiffy. The single treadle was a little fussier than what I am used to, but in a few minutes I had mastered it. Ok, now to thread the leader yarn. There was already yarn on the bobbin so I just hooked it through the first hook and...what a minute. 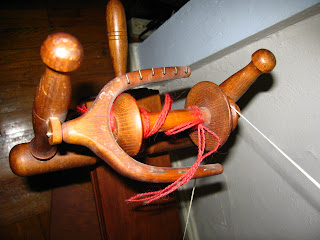 Notice anything missing? No orifice! Nada, niete, none. This was quite baffling to me. There was no evidence that an orifice once existed. It simply never was. Like any good 21st Century spinner, I immediately sent a note to my spinning email list and what I learned has just blown my mind. Apparently, and are you sitting down for this? Apparently, there was a trend popular in the 1950s and 60s for people to buy purely decorative spinning wheels to put in their houses. That's right, spinning wheels that closely resembled the real thing but don't actually work. And all evidence points to this being one of those. What is maddening is that it is thisclose to really functioning.

So much for my good samaritan impulses. Although I also learned in my research that there is someone who has figured out a way to retrofit a working flywheel and bobbin (with orifice) onto these...er...items, I feel my investment in this one is finished. I listed it on freecycle and almost immediately got a response from someone who is sure they can make it work. (I was really clear that it was non-functioning).

Hope springs eternal.
Posted by Robyn at 9:55 AM 1 comment:

We are actually celebrating our May Day with a maypole dance. It brings to mind one of my all-time favorite movies, The Wicker Man (1973 version, please).