Today I am back from a week-long sesshin at the Monastery.  I have a lot to do to make up for being away for a week but I haven't done most of it.  Although allowing one's mind to settle and quiet down leaves a lot of energy for actually doing what is in front of you, I haven't been very focused today.  And although this extra energy made me feel light and, well, energetic despite getting very little sleep, I feel pretty tired today.  Further although many good and important things happened during the course of the week, I am left feeling quite…..how to say?……at the beginning.

My neighbors across the street suddenly started showing up at the Temple in Brooklyn on Sundays.  It was a funny moment as we looked at each other and said, "What are you doing here??!"  They keep coming back and seemed to have enthusiastically embraced the practice and the community.  Just before sesshin, I gave them a ride back to our neighborhood and we chatted about various aspects of Zen practice.  They had lots of questions and I did my best to answer.  Today I feel like ringing their bell and telling them to forget everything I said two weeks ago.  I can't really remember what I said, but please, forget it.

In the rest of my life, to be told no, you're wrong, for over two years would be a pretty clear indication of, shall we say, failure.  Or, at least, that I am simply not very good at this.  The thing about this practice is, success and failure don't actually come into the picture.  As someone who is generally competent and usually pretty quick on the uptake, this kind of perspective is a bit of an adjustment.

I have gotten better at sesshin in the sense that I actually do my practice a lot of the time.  I used to marvel that, out of an entire week, if I added up how long I was really concentrating on my practice (versus daydreaming, fantasizing, sleeping or otherwise blathering to myself about myself), it would probably be an hour or so.  Now, it is closer to about 50% of the time.  I hope that I am not being too generous with myself there but it feels about right.  But that is really the question:  Am I wasting time or am I really practicing?  If the answer is that I am really practicing, then "Keep working on it" is a fine thing - the absolutely correct thing - no matter how long it takes.  To even say that it is taking a long time doesn't make sense.  But it is a weird thing too because no where else in the world has these standards.  So I have to remind myself every so often that even this feeling of being lost and clueless is exactly the right place to be.

Still, while there is no problem, it is an uneasy place.  I am pretty sure that's the idea.
Posted by Robyn at 7:25 PM 2 comments:

Most years go like this:  January to mid-May:  New York.  Mid-May to mid-Sept:  Newfoundland.  Mid-Sept to December:  New York.  Except when we stay in Newfoundland for the whole winter. which is always pretty exciting.  And beautiful.  And cold.  And snowy.  This year is shaping up a little differently.

For one thing, I have to be in Nashville for another yoga therapy training at the end of June.  For another thing, Finn is leaving the nest early.  I used that phrase in a post to an online homeschooling forum recently.  Last night, Finn called me out on it.  He couldn't believe I used such a hackneyed cliché (are there any other kinds?).  Apparently he has high standards for my writing.  Who knew that I had raised such a literary snob?  I wonder what he would think of my digressions?  In any case, he is heading to Italy for a year (or so) to be a WWOOFer.  I wish I could say that it is his deep love of the land and the soil that has brought him to this decision but, I can not.  It is his deep interest in Italian food and the slow-paced lifestyle.  WWOOFing seems to be the most likely way for him to experience it on a budget.  So, off he goes on his grand adventure at the end of May.

Finn's grand adventure didn't, in itself, change too much and Lucy and I were still booked on a ferry in early July.  Then, I started having some doubts.  As loyal readers know, I have been part of a team of women caring for a friend who has Stage 4 cancer.  She calls us her goddesses.  Somehow, recently, I was dubbed "Head Goddess" although I am not sure how that came about.  I am thinking of adding it to my business cards, however.  Although my friend has been holding her own - indeed even more than holding her own; she has been doing great - I have been feeling uneasy about being away for so long.  It just doesn't feel like Head Goddess behavior.   But it still wasn't really clear to me what I should do.

Then a golden opportunity fell into my lap.  I have been searching around for places to teach yoga that would be welcoming of what I do, which is decidedly not Power/Sweat Express/Kick Ass/Rock'n Roll Yoga to the Stars.  It's been a tough sell in this More is More/Vata deranged/if-I-don't-leave-here-drenched-and-exhausted-then-I-haven't-done-yoga city.  Then I remembered J. Brown.  J has made a name for himself as the "gentle is the new advanced" yoga guy.  He trained in the same lineage and has a studio in Williamsburg, Brooklyn, where he has carved out his audience of people who appreciate what he is doing.  It's kind of a miracle, really.  So, I made contact and offered my services (our lineage is small so we know lots of people in common).  I went to his class.  We hit it off.  He offered me a spot in his teacher training on scholarship so we would be on the same page, teaching-wise.  And thus my question of to stay or not to stay was answered.  J's training is largely self-directed but he does hold workshops on Saturday evenings throughout the summer.  Hello, New York summer!

I still have to be up in Cape Breton at the end of August to install the show in Inverness and then we will travel on to Gillams.  Enrollment willing, I will be teaching at the big fibre conference in Gros Morne in early October.  Does that mean winter 2015-16 in Gillams?  It's not impossible!  Just as things sorted themselves out for the summer, I am going to trust that the answer to that question will come in the fullness of time.

After months of spinning only black Shetland, there had to be some pushback….

On Monday, I took my installation down at bkbx.  Another artist's show opened last night (really beautiful - go see it!).  For me, the whole project was about experimenting.  Materials, ideas: none of them were fixed so all of them were open to change.  The thing that began the process ended up being all but invisible.  Some people were disappointed by that, and I had moments of doubt myself, but in the end it was simply how it went.  And I think it left the door open to another project or perhaps to making this one bigger.  Fortunately, I will have that opportunity because the piece will be re-installed (and perhaps re-envisioned) at the end of August as part of an exhibition that I am co-organizing in Cape Breton, Nova Scotia.  More about that later.

As I reflect on the installation, the process of making it and the feedback from people who experienced it, I find myself thinking about what's wrong when we (I) are (am) timid.  In art, and in life, there is a spectrum of wildness or daring.  I have a friend, Donna Sharrett, who makes gorgeous collaged pieces.  They are exquisite in the purest sense of the word.  I will never forget her telling me about the agonizing she did when she decided to add a new element to them.  For her, adding a glass bead when before there were none felt like leaping off the cliff.


At the other end of the spectrum are artists like Cai Guo Qiang.  He thinks big - really big.  What I find remarkable is that, sometimes, his work is just as exquisite as Donna's collages, even when the scale is huge and the materials are gun powder and rockets.  I think of this one, Black Rainbow for Valencia, Spain.  (Link is to a video that it definitely worth watching.) 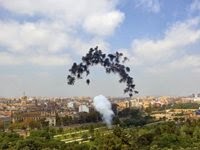 Being rather a fan, I have gone to several of his artist talks.  I remember one time, I think it was when the piece above was new, it was the aftermath of 9/11 when the US was discovering just how wrongheaded it had been to invade Iraq.  Cai was speaking and someone asked him about George W. Bush and his politics.  Everyone in the audience was waiting for him to eviscerate GWB.  Not just waiting for him to do that but wanting him to do that because, in that audience at least, everyone was so angry about what had happened.  We all felt so powerless and it would have been so gratifying to hear this brilliant artist put poor, stupid George in his place.  But no.  Cai just waved his hand and said something like, "Politicians come and go" and moved on to the next topic.  It really struck me that here was someone who had such a huge vision and had such a broad perspective that the rise and (inevitable) fall of a politician who had an eight-year term limit was not worth spending much time dwelling on.  His ideas were larger than any moment in geopolitical time.

I think it is important to note here that it would be easy to put Cai above Donna and say that his daring is greater.  In a way, it is - his failures are larger and certainly involve more people.  But I wonder if there is another way to see it: that Donna's inverse scale - the drama of adding a glass bead - is possibly just as monumental as rockets firing gun powder over Valencia.  How do we understand our own timidity and hesitations?  What - exactly - is holding us back?

That's what I want to know.
Posted by Robyn at 2:40 PM No comments: