When I arrived, I made a Master To-Do List.  When I gave it a once-over yesterday, I was pleased to see that I have made some progress.  Here are a couple of things going on:
I have been participating in the Tour de Fleece this year, having a lovely reunion with my dearest Suzie Pro wheel.  Why oh why did I ever leave her behind?  Beside all the dyeing and spinning up my mother's yarns, I have been working on this skein.  Portuguese Merino is not like Merino Merino.  It is not as fine so it is not as soft - I would put it somewhere between BFL and Shetland.  Like Shetland, it has a kind of inherent integrity that makes spinning it pure delight and knitting with it even more delightful.

Last time I spun it, I made a shawl, which I promptly lost at the Sunnyside Post Office the second time I wore it.  It still causes a pain in my heart to remember it.  I am thinking that I will make that self same shawl with this yarn, just because.  Apparently Portuguese Merino is no longer available through any wholesale suppliers so it may well be my last time working with it.  I'll try not to lose this one!

My other big, executive decision was to change the so-called Guest Room into my studio.  As I have been unable to convince anyone to come visit me here, the room mostly has been empty except that I use it for my yoga practice.  There is another space in the house that, on the face of it, seems like the best place for a studio - the "dining room" between the kitchen and my bedroom - but that space has never felt comfortable to me.  I don't even like standing in there for very long.  Not sure why...maybe I need to burn some sage or something in there to scare away the ghosts.  Anyway, there do not seem to be any demons or unhappy ghosts in this room, which is technically in the basement but still gets lots of natural light and has tall ceilings.  It also tends to be cooler than the rest of the house, which in this cool July (we have had two frost advisories recently!) means the heat is on.  It is a blank slate and I am excited to see what happens in there next!

A fresh start all around.
Posted by Robyn at 10:46 AM No comments:

Every Wednesday morning, I participate in an online yoga meditation class led by my yoga mentor, Chase Bossart.  People log on from all over the place and, for a half-hour, Chase leads us through some movement, breathing and a visualization.  It isn't a huge commitment in time or money and I find it to be an interesting compliment to my usual meditation practice.  It provokes all kinds of questions and offers another way to see things.  I highly recommend it!

Every other week, he also hosts a longer class immediately afterwards where we talk about the classes and how they were constructed and we share our experiences (this class is geared to yoga teachers).  This is my favorite part because it is so interesting to learn how other people receive the instructions and how what seems so simple and straightforward actually is quite complex.

This past Wednesday, after some moving and breathing, Chase asked us to picture ourselves on the peak of a mountain with a clear view for miles and miles.  Then we did some more moving and breathing and he asked us to think about an issue that is unresolved in our life, something we have confusion about.  The thought that came to my mind was, "Should we really be using meditation to fix things?"  Personally, I would say no.  It seems quite important that meditation have no goal.  Let's face it, we often accept ourselves as so small.  We eagerly create little boxes and jump right in them!  Why would this be any different with our so-called solutions in meditation?  I feel quite strongly about this point.  In the second class, following the meditation, we had a really interesting conversation about this that was very helpful, especially as I consider ways of offering meditations to my own students and clients.

This morning, I was still reflecting on Wednesday's conversation but thinking about it in terms of art making.  Art that has an expressed goal to solve some problem suffers from the same limitations and for the same reasons - we generally aspire to so little when actually we have the whole universe at hand.  When I look at my publicly engaged projects, the ones that were most successful - some continue to spur dialogue - were the ones that were the most open-ended, where I proceeded without much of a clear idea of exactly where I was headed.  The ones (and I think mainly of one, in particular) that fell flat were the ones where I had an idea and I tried to force the situation to fit that idea.  Even when I framed it as a question, in my head, I already had the answer.

Those kinds of projects interest me less these days I think, in part, because I found my own limitations too confining.  I still love conversation and hearing people's stories.  I definitely still love getting people to try new things that put them back in touch with what it means to make things by hand, but those are not the driving forces behind my work now.  Or perhaps I should say that I am trying to make work that has that same kind of energy and contains all those possibilities without needing to overtly ask the questions out loud.  Problem solving without answers.  Or questions, either.
Posted by Robyn at 12:58 PM No comments:


Quiet has come to my house.  My mom, who is about as spry as it gets for 89 years old, is a talker.  As soon as she heard me stirring in the morning, she would pop out of her room and start talking.  The conversational flow would continue until we went to bed, unless of course you count when we both went silent while watching the first season of Downton Abbey.  As the last person on Earth who had never watched it, I had my reservations.   Of course, I am totally hooked now.  Between the storyline and the amazing clothes and Maggie Smith's most excellent snide comments, one would have to be semi-conscious half-wit not to be sucked in.  And so I am (sucked in, not a semi-conscious half wit).

But watching Downton Abbey is not daytime work.  No, it is doled out like slices of delicious cake in the evening when the sun sort of goes down.  The list of daytime work is getting longer each day but, while my mother was here, it looked a lot like this: 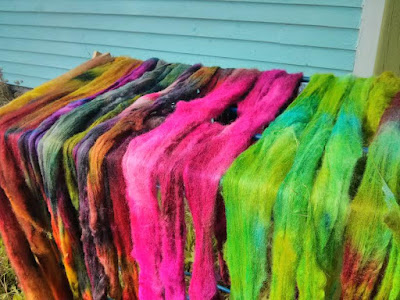 I showed my mom how to paint fleece with acid dyes.  She has rather a reputation when it comes to painting based on the way she uses as little paint as possible when she works on her canvas boards.  Perhaps as a child of the Depression she has scarcity issues but for whatever reasons, her paintings always look like studies in how to create a picture with as little paint as possible.  As a conceptual framework for an art piece, this is not the worst idea but I am pretty sure that is not her motivation.  In any case, I was quite curious how she would react to pouring dye onto fleece and to the general chaos of the whole endeavor, which is the high point for some of us more wasteful kinds of people.  Turns out she had no problem with color.  Witness above.  The brightest ones are her's.

This daytime work allowed me to put my Downton Abbey time to good use and spin up some of the painted fleece as quickly as possible so that she could take the yarn home with her. 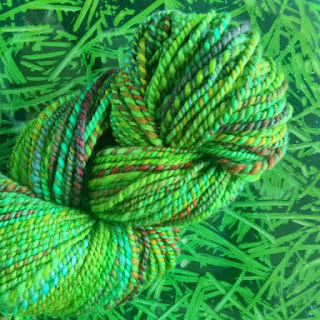 I have two more skeins to go.  Fortunately, there are five more seasons to watch.


Have I awakened from a dream or did I just fall asleep?  It feels like one or the other as it seems like I never left this beautiful place.  Yet, it's been a good, long while as evidenced by the amount of effort it has taken to get the house up and running again.  We are almost re-connected with the world (phone is still out) but, given what is going on out there in the world, being out of reach and out of touch might have its merits.

For the past several days, the most important thing has been getting running water again and taking care of the wood that resulted from cutting down the apple tree in the front yard.  As far as the split pipes were concerned, our generous (and skilled) neighbor did some excellent plumbing work - for the price of a lemon meringue pie.  The apple tree is taking more time to manage as it was "very branchy" or so said another neighbor.  Lots of valuable firewood to be had but it is no small task.

This year, I was coming up alone for the first time ever.  In an act of brave spontaneity, my mother accepted my invitation to join me when I stopped by her place on the first leg of the journey.  I had an extra bunk on the ferry and she needed to get out of her senior housing while some complicated drainage projects were worked on.  A match made in heaven!  Pretty sure she was regretting her decision when we discovered the cracked pressure valves and such.  But things are quite civilized now, as I write this and drink my tea while looking out at the sparkling bay and deep green mountains, a pleasant breeze passing by.  My mother will return next week and then I will be alone.  It is exciting and a little scary.  But mostly exciting.