Another ferry crossing (my 28th, but who's counting?).  Another drive through Nova Scotia, New Brunswick, Maine, a sliver of New Hampshire, Massachusetts, Rhode Island, Connecticut, and, at last, New York.  A quick dash into our house (rented until mid-September) and away again.

The children are with their dad, enjoying togetherness.  I am at the Temple in Brooklyn, then upstate to Zen Mountain Monastery for two weeks enjoying a different kind of togetherness.  Diving into practice, being back with my sangha, soaking up what it has to offer after months away.

I won't be posting until after my return, but please stay tuned!  The fall, winter, and dare I say it, spring, are loaded with projects and activities and ideas.  A rich season is ahead of us, so it is extra wonderful to take this moment to sit in stillness, and deliberately set an intention, then act on it.  Really, that's never a bad idea.

Enjoy the end of summer and coming of fall!  This one will never come again.

Because These Bags Ain't Packing Themselves

We didn't pack or clean or do anything towards our leaving in just a little less than 48 hours.  Instead, we drove out to central Newfoundland to try to find a beach that had been recommended to us as a beach combing delight.  Top secret location!  Except for the new signage helpfully posted by the local municipality! 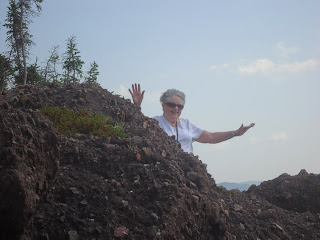 Grammie pushed the rock climbing envelope, once again proving that 86 yo does not have to be sedentary. 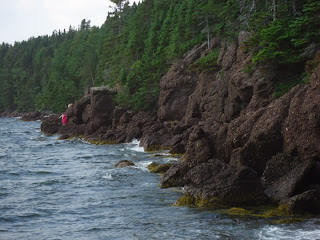 Lucy and her friend managed to get as far away from us as possible without completely disappearing, once again proving that 14 yo's do not like to listen to the conversation of their elders for longer than 2 hours without making an escape. 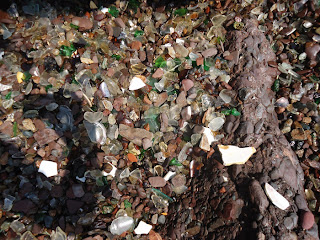 The place is called Glassy Beach.  I wonder why? 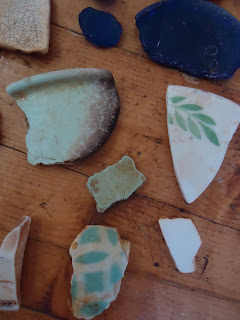 Can there be anything more romantic than ceramic shards worn down by surf and tide?  I suspect not.  Each one makes me want to cry - so beautiful, so melancholy.

We had the first frost warning last night so that can mean only one thing - time to pack up and return to the Big, Bad City.  Between cleaning, packing, getting the house ready to stand empty for the winter and teaching my last yoga classes, naturally I have been diligently ignoring all that and working on my shawl project. 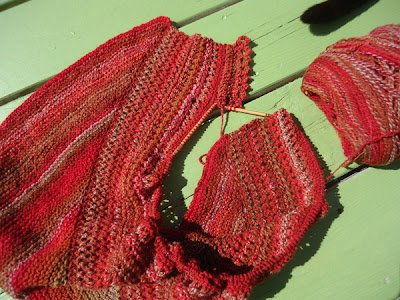 I can't put it down!  The simpleminded glee that results from the colour changes in the yarn are enough to keep me knitting and knitting.  The pattern has been total fun-ness, the yarn, a never-ending delight, and now... 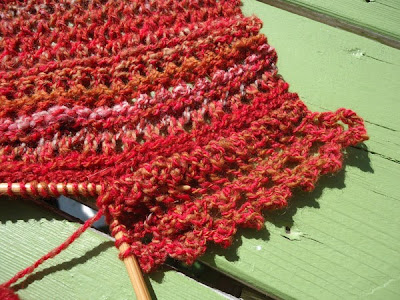 Is there anything that can make one feel more like a freaking genius than knitting a very clever lace edging? 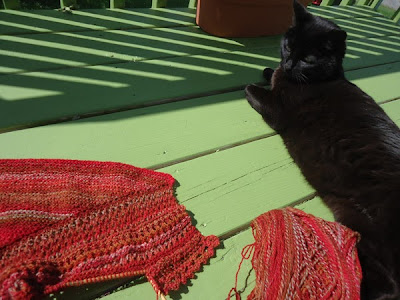 To be sure it is a bittersweet thing, this saying good-bye to the place (and people) (and cats) that we love so much.  It is good to have a little something to soften the blow.

In case you are not a regular reader of Lucy's blog, may I direct you there now?  No one can pen a haiku about kale the way she can.
Posted by Robyn at 9:42 AM No comments: 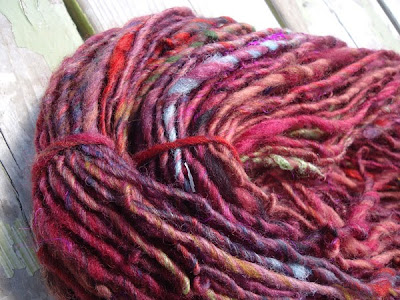 This one started out as Yuck for me but, with each passing day, it is becoming Yum. 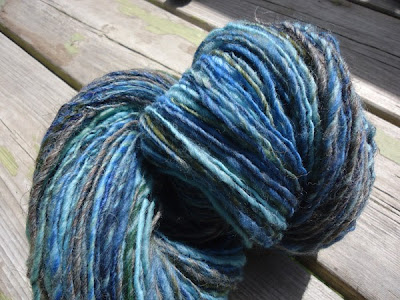 This is the yarn from the batts that Lucy Workers Unite! Love carded.  Too bad I couldn't exploit her just a little bit more.  She has good taste for a member of the proletariat. I think I have made this skein of yarn about six times before and, each time, sold it in my etsy shop.  This time, however, I am keeping it for myself.  Land and sea as made manifest in wool. 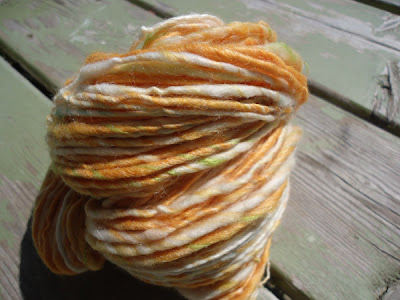 This one is like a cantaloupe, only, you know, less damp. 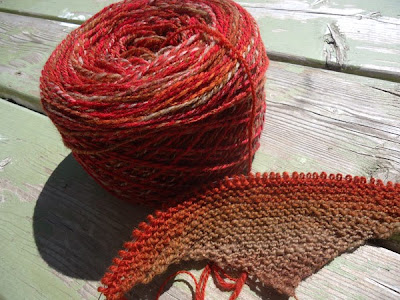 Here is my gorgeous Portuguese Merino, balled into a cake and the beginnings of a scarf with just enough lace (don't worry - it's coming) to make it a challenge but not so much to make it intimidating.  I am already in love.
Posted by Robyn at 3:05 PM 3 comments:

As part of my run-in with the M-words, I did an inspection of my fleece stash in the basement.  It appears (fingers crossed) to be untouched by any wool-eating insects.  During that inspection, however, I also was able to determine that I have a sh*tload of fleece.

Something needs to be done! 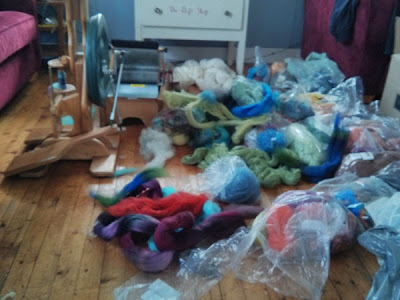 My solution has been to card up as much of it as I can.  The majority of it is yet undyed so I pulled out all the dyed fleece and set to work.  Then, when I tired of carding, I offered to pay Lucy to card.  She did three batts, got paid, and immediately claimed that she had been exploited.  Guess that means I can't count on her assistance in the future.

Today, as I prepared for another day at the drum carder, a friend called.  Would I be interested in taking a boat tour to Goose Arm?  Um..?  Yes!

In the eleven years that I have been here, I have never once been out on boat on Middle Arm (our bay is one of three: Humber Arm.  Middle Arm is, well, in the middle and North Arm is the furthest north). Middle Arm breaks off into two other Arms:  Goose Arm and Penguin Arm.  We saw them both today! 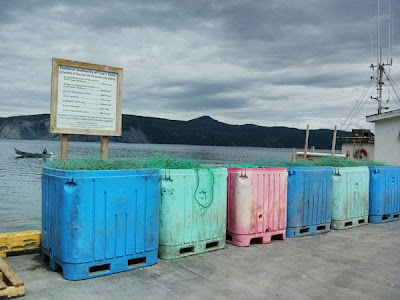 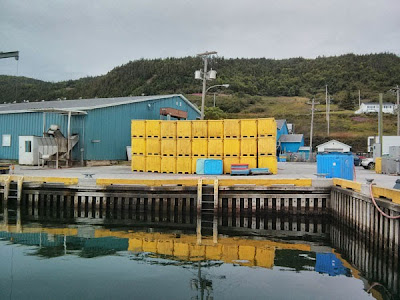 We left from Cox's Cove, down by the fish plant.  Wasn't much happening there today because there is supposed to be a big storm tomorrow and, apparently, the fish know this and get prepared in some way that makes catching them impossible. 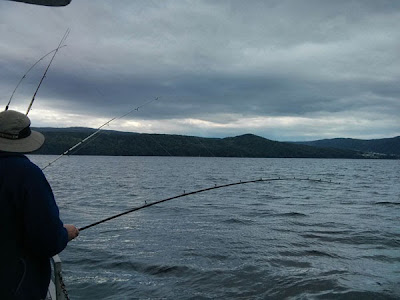 But catching them the old fashioned way, with rods and jigs, was still ok.  Although truth be told, no one really caught much.  I think this had to do with the fact that we saw an amazing school of porpoise in front of us - including one that did a full-body leap out of the water.  It was brilliant and stunning and made one feel happy to alive in a world where such things also lived.  But I suspect those brilliant animals chased all the fish away.  Just as well (perhaps).

The place is magical no matter what. 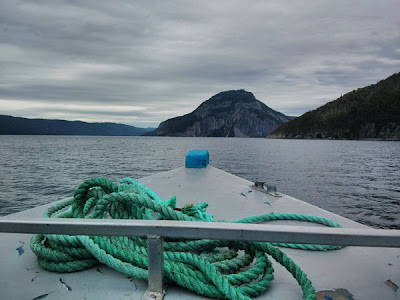 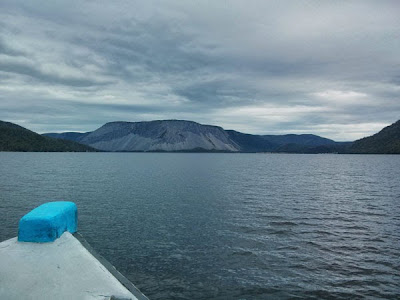 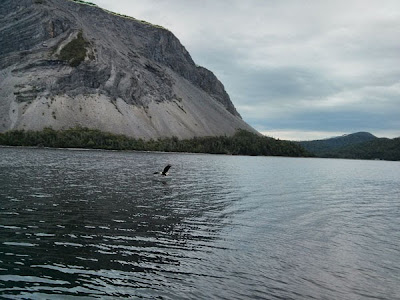 We even saw two bald eagles (that's one above there, captured as best I could with my phone camera) with their chicks.  And by "chicks", I mean six weeks old eagles that already have about a five-foot wing span. 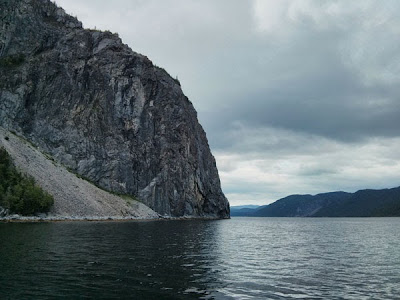 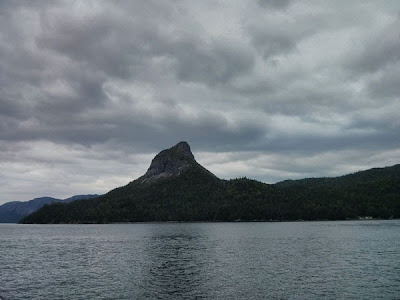 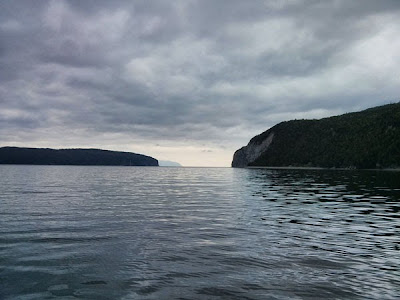 The drum carder will still work tomorrow....
Posted by Robyn at 9:06 PM 2 comments:

The first M-word?  Merino!  Here it is, my wonderful Portuguese Merino, which feels more like BFL for those who care about those sorts of things.  Personally, I found it more fun to spin than other Merino and I love the feel of it now as a...shall we say....fingering weight two-ply yarn. 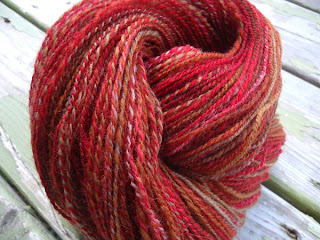 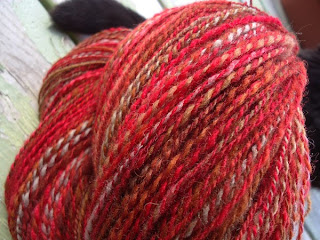 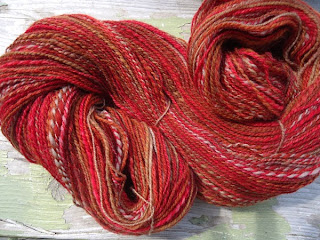 The colour!  The colour!  Just shy of 600 yds, but beautiful, every inch of it.  I may have to gird my loins (so to speak) and actually knit some lace myself with this one.  The time has come!

As for the other M-word?  I am sad? horrified? disgusted? to admit that it is the most dreaded of all M-words...moths.  We got 'em.  Truth be told, Lucy sent me a text when I was almost home from Saskatoon telling me that she saw moths in one of my knitting baskets.  What?  Don't you have more than one?  Anyway, I did a search of it and didn't find much evidence so I did a rather cursory freeze/thaw routine of its contents and assumed all was well.  I made this assumption even as I was seeing little, fluttery creatures shimmering around the house each evening.

Oh, they could be anything!

Why in the world was I being so casual about the possibility of wool moths in a house filled with wool?  Even I can't answer that.  I finally realized that I needed to take serious action - NOW - after I actually saw the moths leaving a small pile of handspun.   As I tossed the contents of all my knitting baskets into plastic bags headed for the freezer, I was shouting, "I have probably a thousand dollars worth of wool in this house!"  Lucy was just laughing - who in their right mind has a thousand dollars worth of wool in their house?

Your own mother, my dear.  Now, help me pack this stuff up!

I am fairly certain that the infestation (how it pains me to write that) is limited to my yarn baskets and does not include my fleece stash in the basement.  Ever the optimist!