I knew it would happen one day.  It was a day that was always in the future.  But then the future came to my doorstep.  It was the day when I would have to untangle The Knitted Mile.

After its brilliant premiere on the streets of Dallas, TX, the piece has mostly been stuffed into two, large garbage bags.  It was an almost-but-not-quite mile-long knot.  Once I took it out and showed it as a giant pile, along with the photographs of the knitters who helped me make it.  But mostly it has sat in my studio in its very undignified form, almost anonymous given the humble, if practical, covering.  This piece, which has gotten into books and has gained me invitations to exhibitions and other projects, has not been fully appreciated in the intervening years, I am sad to admit.

And then the day - THAT day - came.  It was time to untangle.

A friend helped me carry it home from the studio where it is too dirty for this kind of work.  I gingerly unveiled it.  Was it as bad as I remembered? 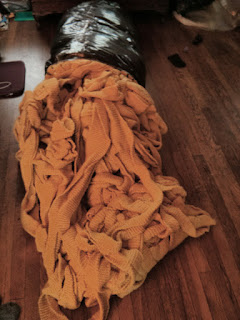 Yes.  Yes, it was.  (Sorry about the poor photographs - it was a dark and humid and, did I mention hot?, day.)

I found one end and began the process of laying it in a box like a fire hose.  It is the same way I laid it the back of the car when I installed it in Dallas. 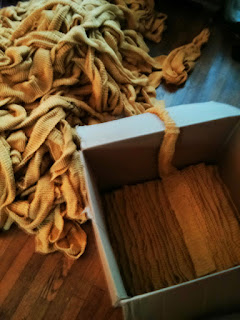 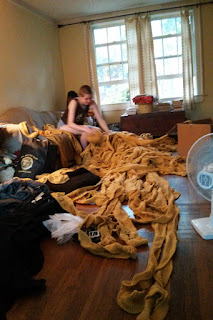 There might have been a little Huckleberry Finn/Tom Sawyer fence painting kind of thing going on but, as some might have predicted were they of the nature to make those kinds of predictions, certain others could not bear to watch my incompetent untangling method.  Just as she was beginning to say things like, "shouldn't I be paid for this?", a friend texted her and she found an escape hatch.  But I could tell that she was a little disappointed too.  This is the kind of thing that really excites her. 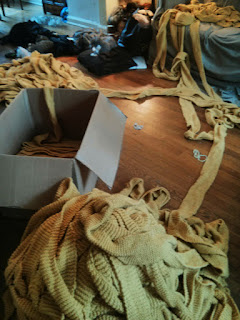 Then it was just me and knitting and the humidity. 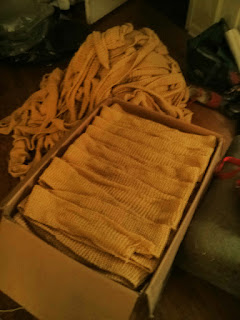 In the end, the box was filled and I was left with two balls. 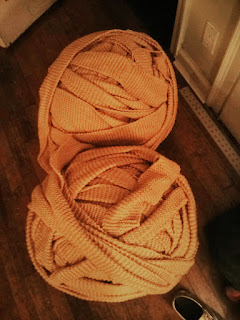 This is fine.  It will work for my piece for Ithaca College, which I have titled, Heaven is the Most Dangerous Place of All.

One topic that came up during the Nashville training (in addition to Ayurveda) was transference and counter transference in the student/teacher relationship.  We were mainly discussing it in relation to our roles as teachers - many of us also will begin mentoring other yoga teachers trained in this tradition as well.  Our training is preparing us/has prepared us to work with people one-on-one, which creates a much more intimate relationship than in a typical 1.5 hr. group yoga class.

People come to yoga looking for something - usually they are seeking moment of calm in their stormy lives or they want to do a headstand.  One of those two.  (I'm kidding!!)  A teacher worth their salt is embodying the practice and discipline that she teaches, so it isn't difficult to see how one could fill in the blanks in a way that skews reality one way or another.  People need their teacher to be better than they are, else why have that person as a teacher?  Yet, there is not a direct relationship between knowledge, understanding and realization and being a good person.  In fact, one can have a stunning depth of understanding and realization and still be a total asshole.  It is hard to reconcile this fact because if you "get it", indeed, not just "get it" but have a penetrating insight into the true nature of things, why would you go around harming people?  It doesn't make sense!  And yet, it happens.

I think delusion is like that first poop that babies produce after they are born - the meconium.  It is dark green and made up of the waste of everything the then fetus ingested while still in the womb.  Just as  you might look at the teacher who has done something so harmful, so painful, to others that you simply can not believe it, you look at your beautiful, little baby and experience a kind of shock and awe that this tiny, perfect being has managed to produce such a horrific substance.  The sheer volume alone is alarming but mainly it is the way it defies being cleaned-up: its tenacity as it clings to everything that comes within a foot of it.  You have to tip your hat to it, man.  It is not fooling around.

And so with delusion.  Composed of everything we ingested before we even knew we were ingesting things, it clings to everything.  That's its nature.  Sometimes we are not covered in it.  For some of us, even a lot of the time we are clean.  But. if we think we have cleaned it up completely, you can be sure that you will find a big, old schemer down the front of your shirt the next time you look down.

One of my projects over these past several years has been to learn to respect my delusions.  First, however, I need to get to know them.  Of course, I can't know them all but I have noticed that they have patterns and tend to run along thematic lines.  Occasionally when I get a glimpse of just how deep seeded they are, it is a moment of breathtaking humility.  Perhaps this is what a good teacher needs above all - breathtaking humility in the face of their own delusions.  This isn't a false modesty - it is ok to know things and even be good at certain things.  It is more like what Donald Rumsfeld said about the known knowns and the unknown knowns.  Know that the unknown knowns run deep.  And are very sticky and difficult to clean up.

It is a good place to start.

There Is No Such Thing As Summer Vacation

Since returning from Nashville, it has been something of whirlwind.  Getting back into my schedule, birthday celebrations, Canada Day celebrations (are they two or one thing?), and general socializing with loved ones has meant all that profound Ayurvedic information has gone out the window, for me personally anyway.  Yesterday my main food group was ice cream.  Can you say vāta aggravation?

In true vāta style, there is no time to linger on that - I have places to go and things to do!  At the end of August, I will be in two exhibitions, one of which I am co-curating.  There is work to be done for both of them.

The first exhibition is titled Interlacing Converations, which will be presented at the Inverness County Centre for the Arts in Inverness, Cape Breton, Nova Scotia.  Interlacing Conversations explores intersections of traditional and experimental fibre arts. The exhibition celebrates projects made possible through collaboration and exchange across geographical and cultural distances.  I am co-curating this show with Elizabeth Whalley, who is the new director of the ICCA.  I think it will be very exciting because we will be presenting the work of some amazing artists such as Mackenzie Kelly-Frere, Barb Hunt and Janet Morton, among others, along side the work of local craftspeople from Cape Breton, without distinction between what is art and what is craft.  By this I mean that everything will get equal billing.  And yes, I realize that I have listed most of the fine artists by name and just lumped together the craftspeople but that is only because Elizabeth has been handling that end of things and I don't yet have their names.

Mackenzie is creating a site-specific piece in collaboration with local knitters that furthers one of his previous projects Air Over Land.  The new project, Cast-Offs, is a series of 50+ hand knit wind socks/flags that will simultaneously fly over Inverness, Nova Scotia, and Calgary, Alberta (or just outside of Calgary).  He created a Ravelry group for the project if you want more information or if you want to participate.  Check it out here (Ravelry link).

There will be much other beautiful work and I will show images as it progresses.  For myself, I will be performing my SpinCycle piece (and I am very excited to have my Canadian premiere of that piece!) and re-installing To Stand in the Centre and See All Around in a new way.  I won't say too much more except that I am back at the black Shetland.

The other exhibition came about during my time up at The Saltonstall Foundation.  I had a studio visit with Mara Baldwin and Vin Manta of Ithaca College.  Vin wrote up a blog post about it here.  Mara, who is the curator of the Handwerker Gallery at Ithaca College, then invited me to participate in their season opening show, Starting From Scratch.  Starting From Scratch uses Charlotte Perkins Gilmans novel, Herland, as a jumping off point to think about utopia, gender, isolation, exclusion, and community.   I will be re-purposing The Knitted Mile and creating a new Utopia Tent for this exhibition.  I am hoping to do an artist talk/performance while the exhibition is up in September.  More on that later!