Sometimes the truth of impermanence is easy to forget and sometimes it insists on being right in your face.  Of course death makes it ever so real and clear.  But so does children growing up and taking on adult roles in the world.  Ok, scratch that...I just went up and took a gander (and a sniff) at Finn's room and he still has a way to go on the adult front.  But, the truth is, he is slowly getting his act together and seems poised to go on another international adventure, this time far outside his comfort zone.  Although I suspect he has no idea just exactly how far outside.

Then, on Thursday, Lucy will officially graduate from homeschooling.  That era of our lives will be officially finished.   I was never very big on anything official as it related to homeschooling, but if you count it the way the state of New York counts it, then I did it for 13 years.  When I said this to Lucy, she said, "More like six!"  (That's her assessment of how I participated in the endeavor - such is the gratitude of a 17 yo.)


Our opinions about how things are flowing through our life are just, like, our opinions, man.

Or as a wise person recently said to me when I was telling him how one day I feel one way and the next day, I feel another way - that's the thing about feelings.

My former father-in-law, James W. Allen, died on Monday night at the age of 97.  For nearly all of those years, he was healthy and sharp - Jack the Needle, he sometimes called himself.  A heart attack five months ago was the beginning of a decline in his physical health but, for the most part, he defied all expectations about what a person in their 90s was supposed to be like.

He was a walking piece of history - in the picture above he is re-visiting Anzio beach in Italy, where he landed as a 19 yo foot soldier in WWII.  He did many, many things in his lifetime, including, at age 40, get married and start a family, eventually having six children in the space of ten years.

I knew him for 31 years, first as one of his son's girlfriends, then as a daughter in law and then as a former daughter in law.  Men of his generation aren't really the type to be warm and fuzzy so I felt his affection from his teasing and the way he enthusiastically took up the minutia of the local geography of my hometown in Massachusetts and, later, Newfoundland.  Indeed, one of the first questions he would ask anyone he met was, "where are you from?"  I honestly never saw him not be able to pull out some obscure geographical reference in reply to their answer, "Oh, that's about ten miles from Sioux Falls on Rte 29?"  leaving the rest of us standing there wondering how in the world he knew that.

How do you measure success?  Money?  Houses?  Flashy accomplishments?  How about creating a family of very good, smart, funny people who love you dearly and devotedly?  By that measure, Jim Allen was a stunning success.  He also was a decent, good man who will be sorely missed by all who knew him.
Posted by Robyn at 9:10 AM No comments: 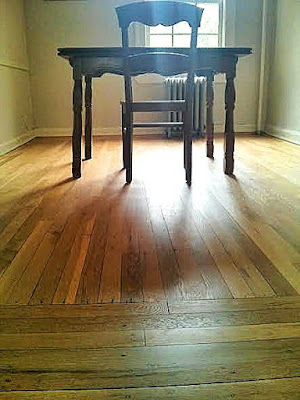 We all agreed that the empty rooms were very appealing.  Lucy suggested that we leave them empty for as long as possible so we could see what we really need and use.  Once we got the go-ahead to start bringing things back it, it has been a very slow dribble.  Yes, to the pink couch.  Yes to the little side table that Finn made.  Yes to the bookcase.  Not yet to the books.  The dining room table was a yes as is one chair (so far).

It's always the question, isn't it?  How much is enough?

(Sorry - not the Beyonce kind of lemonade.  No Becky's.  No nice hair.)


After I lost my studio, I created a mini-studio in a cloth grocery bag that sits near to our dining room table.  I keep several sketch books, pens, ink, watercolors and some other supplies in it.  Now, when I "go to my studio", I simply pull the bag over and dip my hand in.  No pressure and no pre-set ideas about what I am supposed to be doing.  Oddly enough, I find these moments (rarely do I spend more than a half-hour or so drawing) have become as essential to my day as breakfast, lunch and dinner.

The ritual of getting to a studio, shutting the door and making art has its place.  The ease and the no-big-deal-ness of pulling over a bag and simply getting to work also has its place.  Without a separate space devoted to art making, I am really enjoying this no muss, no fuss take on it.

After I'm done, the sketch books get put away, the brushes washed, and the bag returned to its corner. Ready for tomorrow!
Posted by Robyn at 1:15 PM No comments: