My camera cable has arrived but, as is usually the state of things, I don't really feel like talking about the show in Nova Scotia right now.  Maybe I will tomorrow.  What I want to write about is trust.

Someone asked me yesterday what I trust.  He meant it in a Big Picture kind of way.  In a "Do you believe in God" kind of way.  I don't think a lot about God as he/she/it is thought about monotheistic traditions.  So I told him that I believe there is a perfection to the Universe.  I trust that.  I also trust my practice.  And when I said that, I realized that I must trust myself on some level because...who else is practicing?

This came up because I have been thinking about my piece, To Stand in the Center and See All Around.  The piece that I fondly also call Bitch Slapping Richard Serra.  That title is not so politically correct, even to me who made it up, so I don't use it.  Except sometimes.

I made the piece with a pretty specific idea in mind, which was to create a wall of black wool that would absorb light and create a presence that could not be ignored.  I didn't really know what else it might create but that was my starting point.  I bought pounds and pounds of black Shetland wool and I spun it into a thick, single ply yarn.  I knit it up in stockinette stitch with some purl stitches here and there so that it would come out like a rectangle, not a parallelogram (it's a spinning thing).  I took it with me everywhere - to Nashville, to my friend's chemo appointments, everywhere.  And, as a result, it absorbed all that energy and started to have an unexpected presence and power, even as it sat on the needles.

But I didn't trust it.

For my BKBX exhibition, I added mirrors and sound and special lighting effects and even inflatable bladders.  I pretty much created a three-ring circus around it so that the piece itself was totally lost.  Truly, you couldn't even see it in the installation.  Not surprisingly, I was less than happy with how that all turned out.  Not exactly feeling crushed by failure but it has been more of a nagging sense that it just didn't do what I wanted it to do.

The good news is that I used the mirrored cloth in my installation for Starting from Scratch at Ithaca College and it looks great.  Totally works.  The knit piece, however, sat on my living room floor and became little more than a very large, luxurious cat bed for a few months.  I tossed it in the car when I left for Cape Breton, not convinced that I would even have the nerve to try to pass it off as art.

Then, it happened that there was a wall in the gallery that fit it perfectly.  A nook, even.  So I hung it up.

I paired this piece with my SpinCycle performance and I spun (with help from various people pedaling and storytelling) the same black Shetland wool that is in the piece.  I think the two go together quite well.  The strength of this piece is that it is full of all the stories and energy that it collected over the months in which it was made.  It is the antithesis of minimalism while still being very minimal.  So, I like that the SpinCycle piece is a kind of companion to it.  In fact, suddenly I saw my recent work in a new perspective and I could see a fresh direction for it.  It feels true, somehow.

If you were a literary type, you might see this as a metaphor for how one lives one's life.  Not trusting, we add all sorts of layers - call it a three-ring circus - around what it already simple and complete and powerful.  Trusting, we can let it just be what it is, which is always more than we can imagine.

When I wrote that I had sorted through my books in my last post, I was not being 100% honest.  I hadn't sorted through my knitting/sewing/craft books, which I kept on a bookshelf in the basement.  It was more daunting than the other books (or so it seemed) so I left them for last.  But sort, I did, just after writing that post.

I weeded out about 2/3 of them - passed them on to other knitters - and those that remained were put on the bookshelf in the living room, which now had a lot more space because I had already removed all the non-joy producing books.

Could you call it double joy?  As I was putting my various knitting-related books on the shelves in the living room, I had a new wave of happiness sweep over me.  These books that have helped me with many an art project and many a domestic project didn't deserve to be sitting in the basement. They are important books!  They are all about what I love!  They should be upstairs, enjoying a privileged position on the shelves, not sitting in darkness underground.

Such a simple thing - putting books on a shelf.  And yet it wasn't just books on a shelf.  It was me finally filling out the ground I stand on.  Finally giving credit and respect to one of the things that has been most important to me.  Down in the basement with the kitty litter and washing machine and cans of leftover paint?

While waiting for my camera cable to arrive, I have not been idle.  Yes, teaching yoga (two new classes in Williamsburg starting at the end of the month!) (And teaching transgender prisoners at the Manhattan Detention Center starting tomorrow!).  Yes, teaching spinning (intermediate drop spindle in Greenpoint this Saturday!).  But also this: 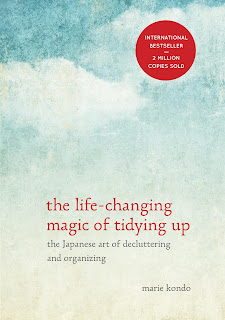 The Life Changing Magic of Tidying Up.

Some friends were talking about it and it sounded so...liberating.  Own less stuff.  Not only that, but only own the stuff that brings you joy.  Who doesn't want to be surrounded by joy?

I began last week and, as the author suggests, I started with my clothes.  I took all the clothes that weren't in the laundry and piled them in the middle of the living room floor.  One by one, I held each item and asked myself, "Does it bring me joy?"  Really, it was quite easy to decide after that.  I bagged up half of my wardrobe and sent it off to experience a new life with someone for whom I hope it does bring joy.  Then I re-folded the remaining items according to Marie Kondo's instructions and found that I have an entirely empty drawer in my bureau now.  The lightness of that feels lovely.  In fact, it is this lightness that I think is the goal of the whole undertaking.  Without knowing it, all that extra stuff (that doesn't bring joy) brings heaviness into our lives.  We carry it without even realizing it.  Only after it leaves do you notice the weight that you have been bearing.

Next up:  books.  This was more difficult because I have books that I would not describe as bringing me joy exactly but feel important.  So I just went with that feeling.  I eliminated an entire bookcase.  I gave the children's books to the local PTA and I set the rest outside on the sidewalk.  All but about ten were taken before it started to rain.  Again with the lightness!  It feels wonderful.

Marie says to slowly progress towards those categories that are more difficult because our attachment to those items is strongest.  Kitchen items are probably next but I am also looking at my yarn/wool stash.  I know there is a lot of dead weight there.

I think it is a very good system of decluttering but it is not for the feint of heart.  And it is not for the short of time.  I have had to set aside a day for each category.  There is a lot of work involved with gathering everything into one place, going through it, getting rid of the the rejects in a responsible way (the author says "throw it out" a lot but I hope she doesn't really mean that!).  Then there is reorganizing the remaining items.  It all takes time and energy.

She claims that no one goes back to their old ways once they do this.  I can see why.  It feels good to live with your favorite things.  It also helps me to better understand what I actually need so I can buy or make new things that I will really use.  It is as if by having fewer things to care for, I can actually care for the things that I have.  And that brings me joy.
Posted by Robyn at 12:08 PM 1 comment:

Still waiting on my camera cable so I can download the photographs of the installation in Inverness.  Meanwhile, The Ithacan, the student newspaper for Ithaca College wrote a nice piece about Starting From Scratch, in which they dubbed my piece "The Thinking Hut".  Love it!

And they used this great photograph of two people inside The Thinking Hut.

The exhibition is installed and open.  I have many pictures but they need to be downloaded and made pretty.  Meanwhile, here are some of the contemporary artist projects that are part of it.  I will post more later when I am less totally spaced out from all the travel.


While I was in Inverness, I stayed at the art centre director's house, which is one of the houses built for the coal miners (coal mining was the reason for the town).  She bought it from the family of a man who was born and died and in the house.  It still had many of his decorating touches and I found them deeply fascinating.  I took lots and lots of pictures in an attempt to capture what was so amazing about it.  Here are but two: