When I went to South Dakota (already a month ago!), I brought extra knitting with me because, you know, just in case I had some down time.  Hey, we all have our fantasies, right?  Needless to say, I did not have any time for recreational knitting on that trip until the drive home.

Leaving Aberdeen, I stopped at the blogless Janine's house near Madison, WI.  With her encouragement, I frogged a sweater that was almost 3/4 finished.  It was one of those things.  I started knitting it knowing that the yarn choice for the pattern was not great.  The whole time I was knitting it, I was saying to myself, this isn't quite what I want.  Each row was confirming what I already knew.  And yet, I kept on knitting.  Such an experience is not limited to knitting, in case you are thinking that it sounds kind of familiar: just keep moving forward and all the fundamental wrongs of this relationship will miraculously become right.

Yeah, so that didn't really work out.

Fortunately, it was just yarn and knitting so ripping it out was not too horribly painful.  I already have picked out a new pattern for the yarn so I feel a renewed excitement about the whole undertaking.  It's all about "moving on" and "letting go of any lingering bitterness" and "not attaching to feelings of anger or self-recrimination" and "releasing any resentment" about "how things are."

That sort of thing.

Meanwhile, I have a new pair of socks on the go as my subway knitting.  They are somewhat green. 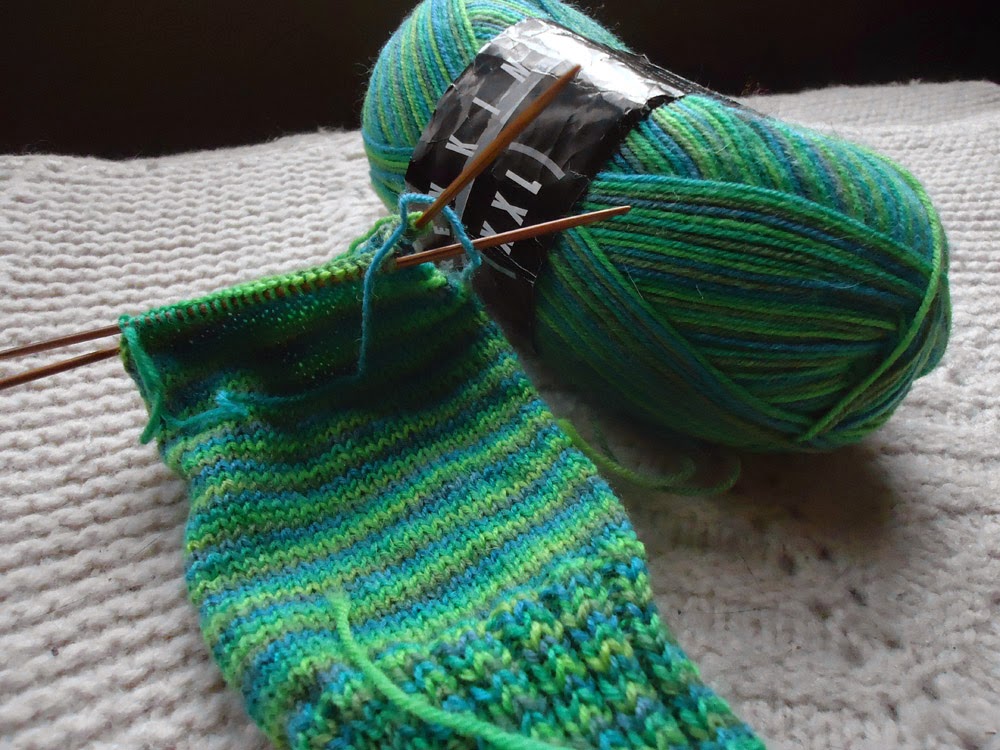 And I finished plying my first yarn on my rental wheel. 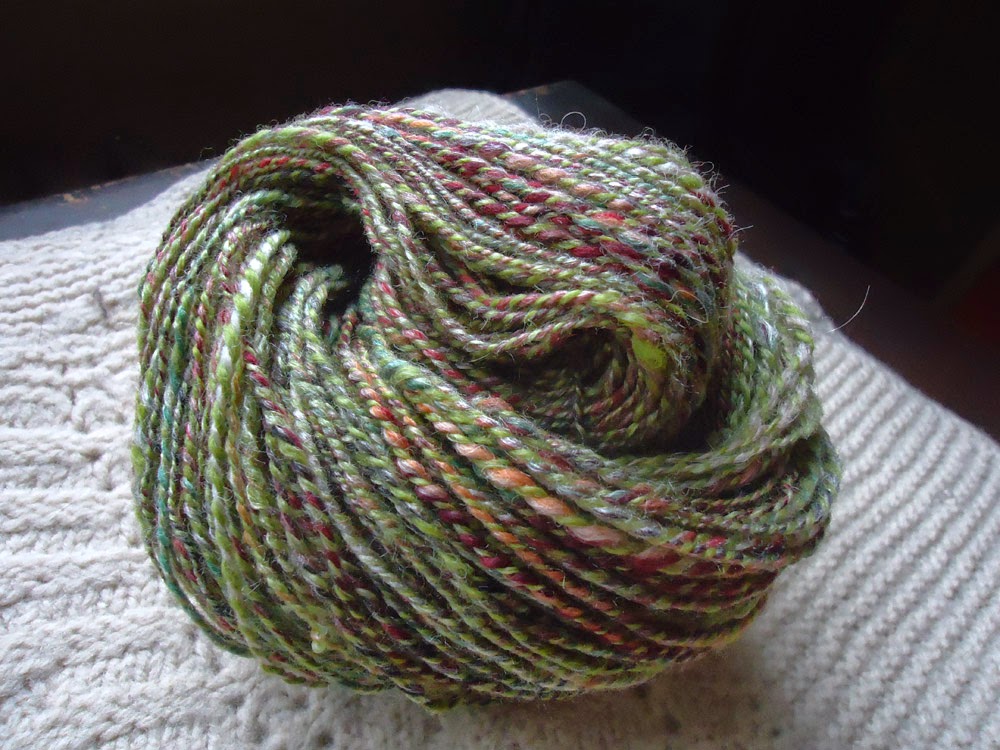 It's so pretty!  But I am not too attached to that either because "moving on" works two ways.  Actually I am lying.  I can't take my eyes off of it and laying my cheek against it and walking around the house showing it to the cats and saying, "look how pretty this is!"

Fortunately the cats refuse to feed my obsession and ignore my displays.  Maybe I should go wake up the kids...?

Hands, Palm to Palm, Together

To leave flowers to the wind, to leave birds to the seasons, are also acts of giving.
(Eihei Dogen) 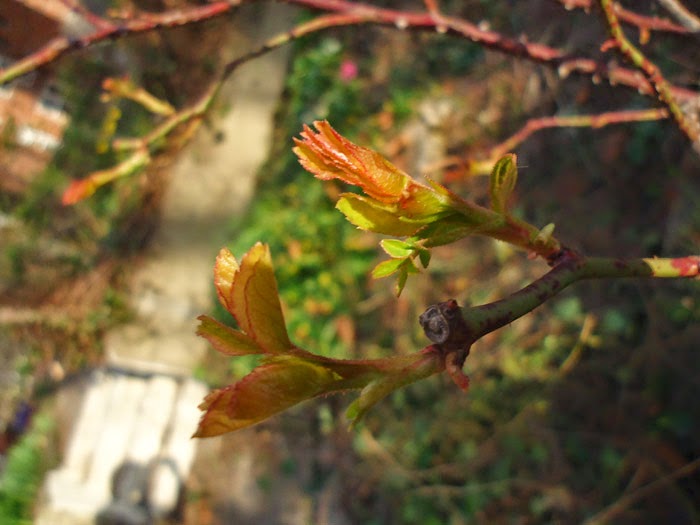 Reflecting on the Value of Making Art in a Society That Thinks Art is Either a Cute Little Hobby or for Romantic But Useless Souls That Are Easily Dismissed for Their Silly Irrelevance. (Subtitle: A Small Amount of Self-Pity Might Be Encountered Here - Be Warned)

It's not so uncommon to have a bit of post-project letdown after a big project is completed.  For months, life has a definite purpose - and deadline.  No question arises about how to organize the day or even one's thoughts.  The goal is relatively clear and the clock is (always) ticking.   There is a beautiful simplicity to it all.

What if you have TWO big projects and two smaller projects?  Is the post-project letdown two- or three- or four-times greater?  Especially if one of them involves driving part-way across the country and back, having your name emblazoned on the wall and the world's best newscast/performance art piece as a result?

In my case, the answer is: no.  I thought I might get sick just because of general exhaustion but I even dodged that bullet (thank you, yoga).  No illness, no depression, no sense of listless aimlessness.  Yet, it has caused me to reflect a bit on some various things that came up during and around the process of making these project - things people said and how the whole crazy time seemed to be perceived by those around me.

I'll start with the many times that I heard something along the lines of "you mean, they just emailed you and asked you to make a show?" as if this was an unbelievable thing that should never had happened.  It was usually followed by some exclamation of how amazing it was.  And it was amazing!  I know I teeter on the edge of a level of success with my art that the vast majority of people who go to art school never see.  At the same time: 30 years, people.  I have been at this thing for 30 years.  Or even longer if you start counting when I wrote that little piece in Grade One saying that I wanted to be an artist when I grew up.  And I kind of do.  Starting counting from then, that is.

I have been working as an artist and working seriously at it - meaning it has been my first concern (well, until I had children but even then it was a close second), my main career and vocation - for a long, long time.  If, finally, someone throws me a bone, well, it's about time!  If someone were a doctor, lawyer, bricklayer, car mechanic or florist for that long, I think few would act so surprised if they received a bit of recognition for their work.  Am I right?  So what's up with it when it comes to art making?  Is it because we still believe that making art isn't work?  Or that it is work but of a nature that doesn't deserve to be recognized or paid or both?  Why?  Because it seems rewarding or fun or that the people doing it aren't having their souls crushed beneath the giant oppressive boot of The Man?

These pre-project exclamations of disbelief that I was not only invited to make a project but paid to do it have been followed by comments about how I was essentially galavanting across the country on a lark, leaving behind others to do the "real" work.

Of course this kind of attitude does infect my own thoughts far too frequently.  Is what I do really of use to anyone?  Am I benefitting the world or just a waste of space and resources?  When I presented this dilemma to a person who is far wiser than myself, he simply asked me, "do you want to live in a world without art?"

A Fierce Heart is a Tender Heart (more pix)

Finally downloaded the pictures in my camera that I took the day before I left South Dakota.  There are some goodies!  Personally, I am loving the many, little colour moments that happen. 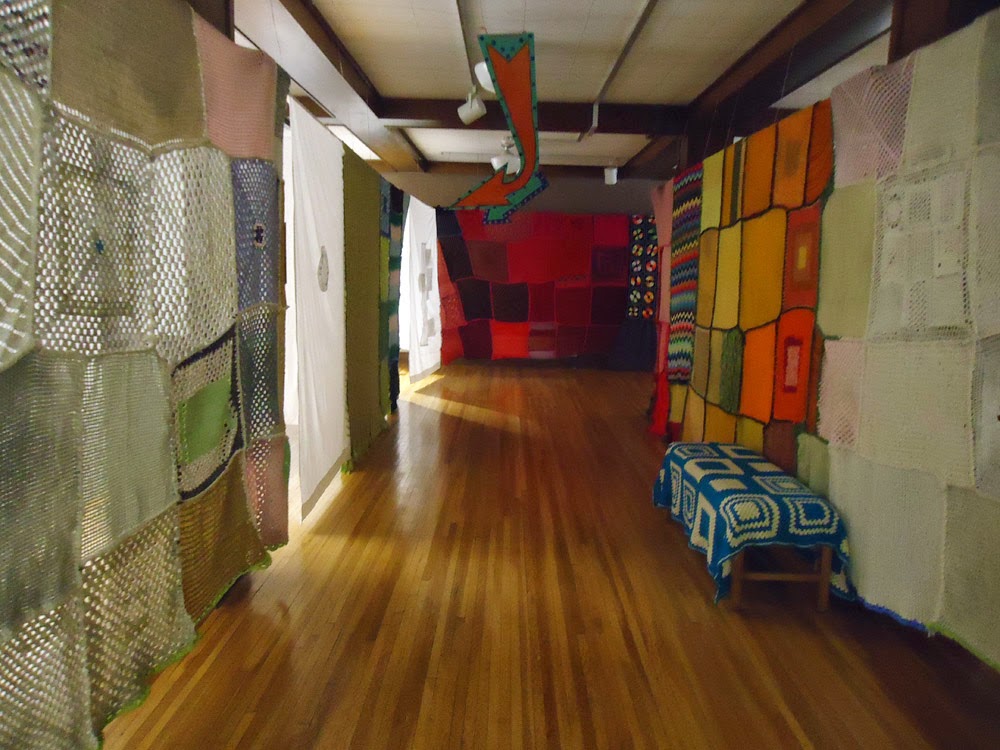 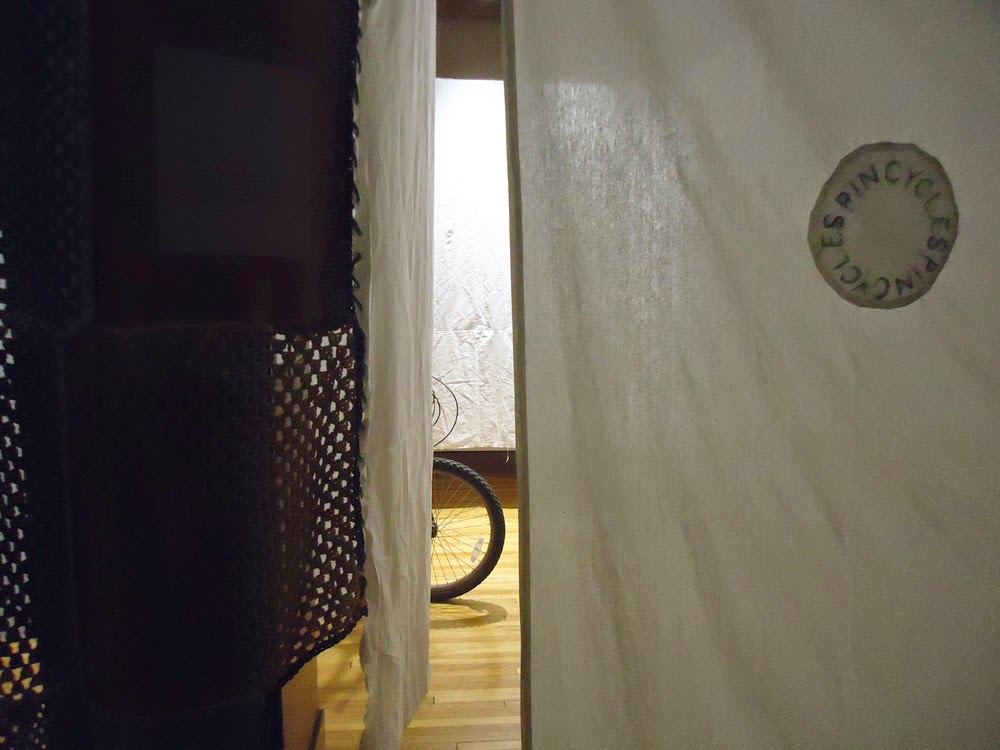 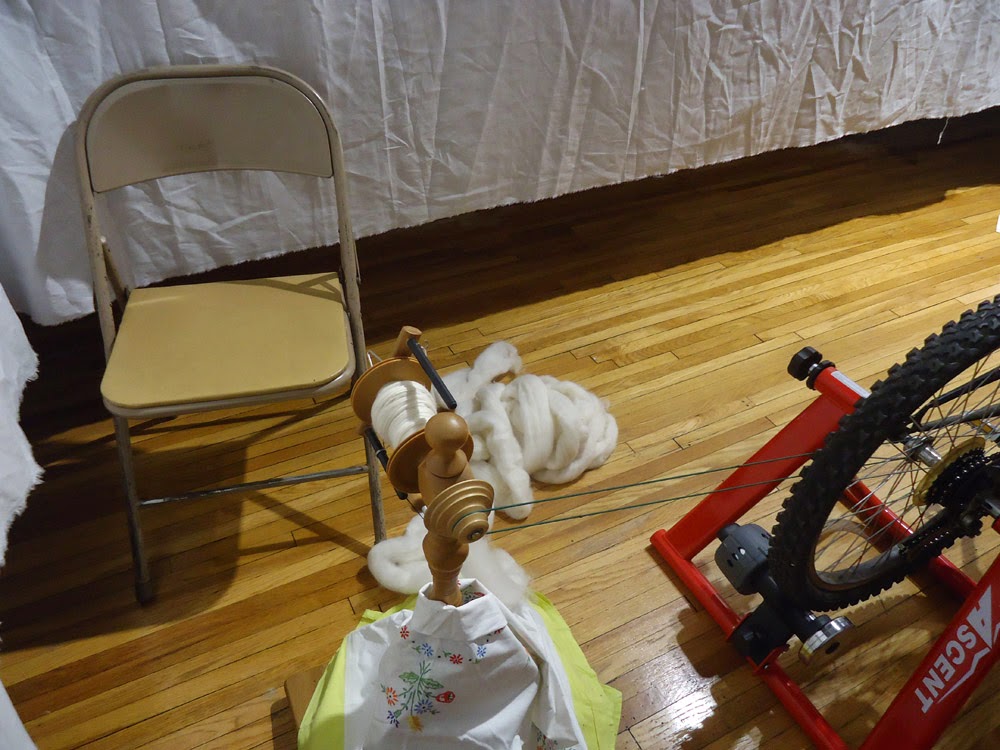 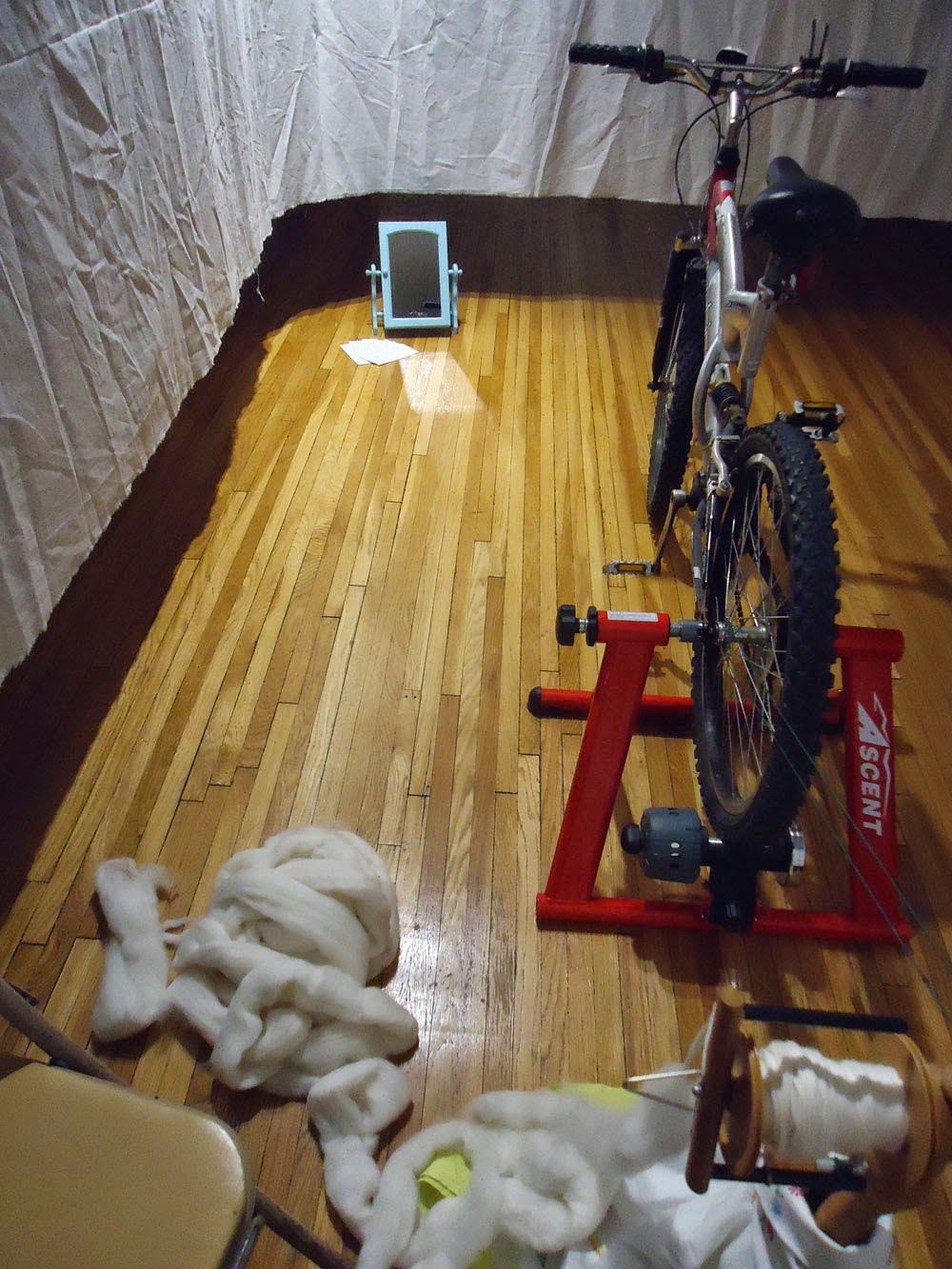 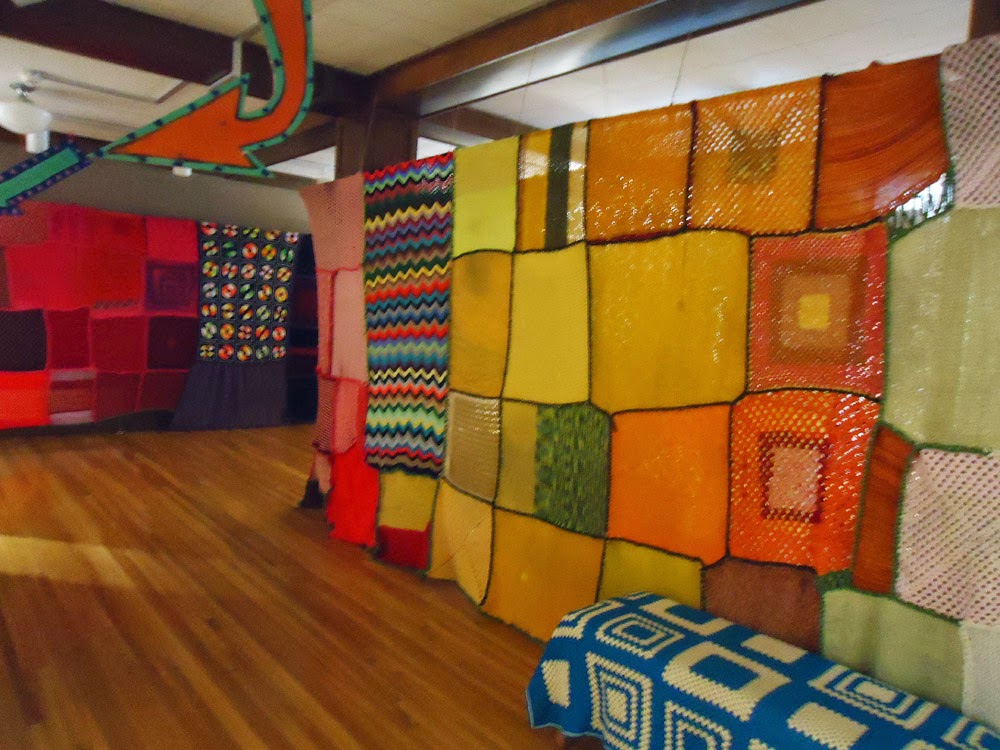 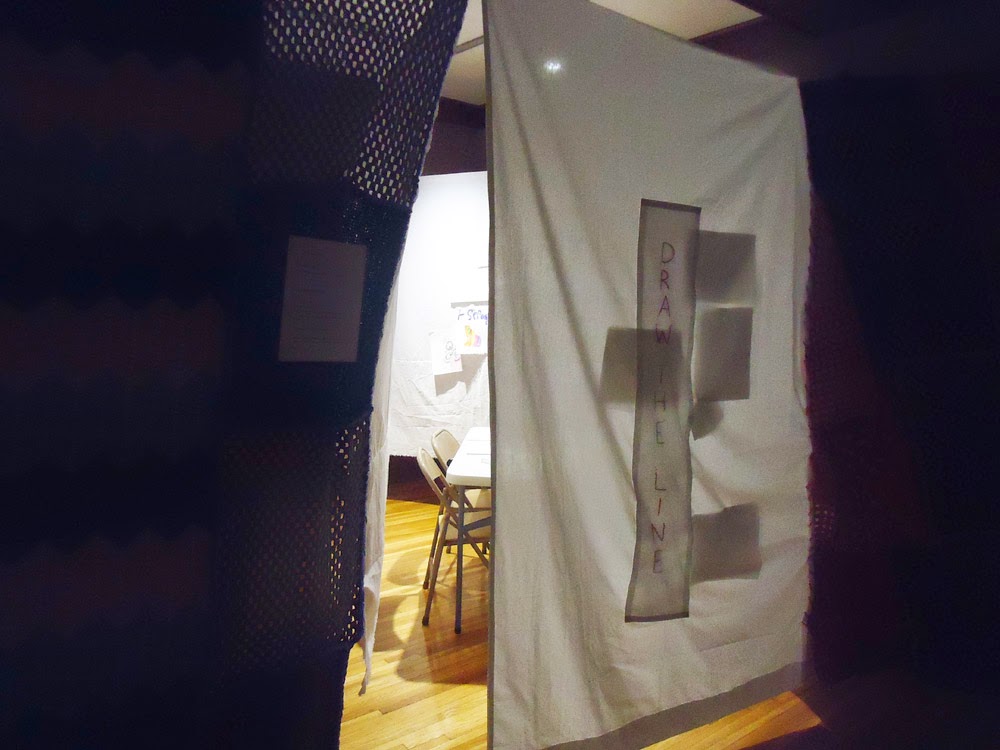 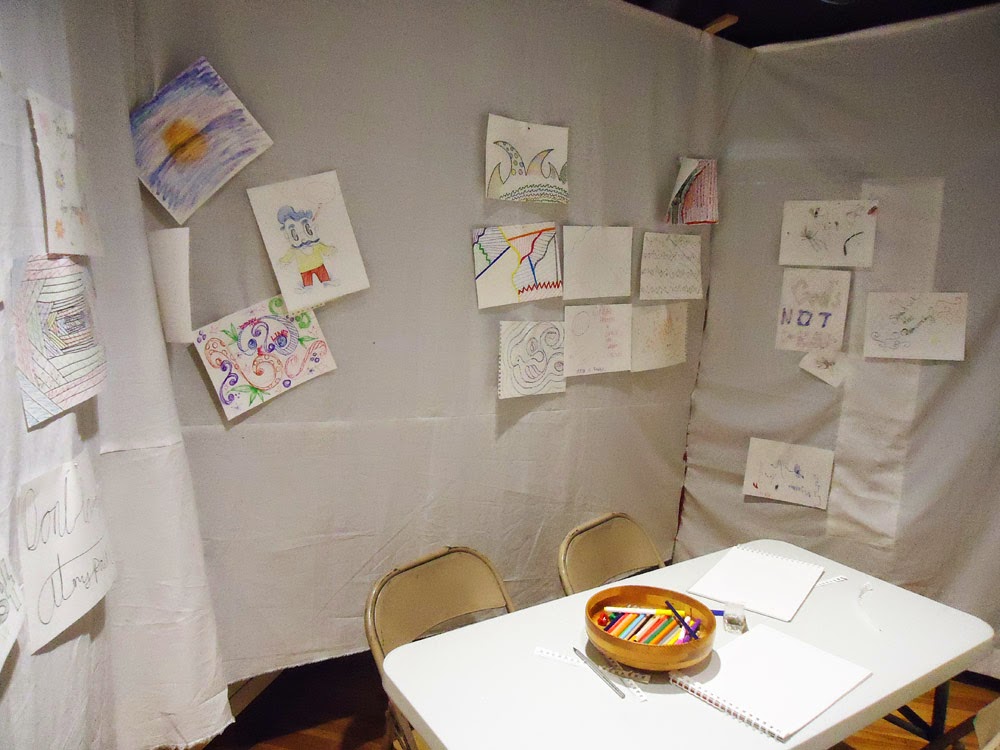 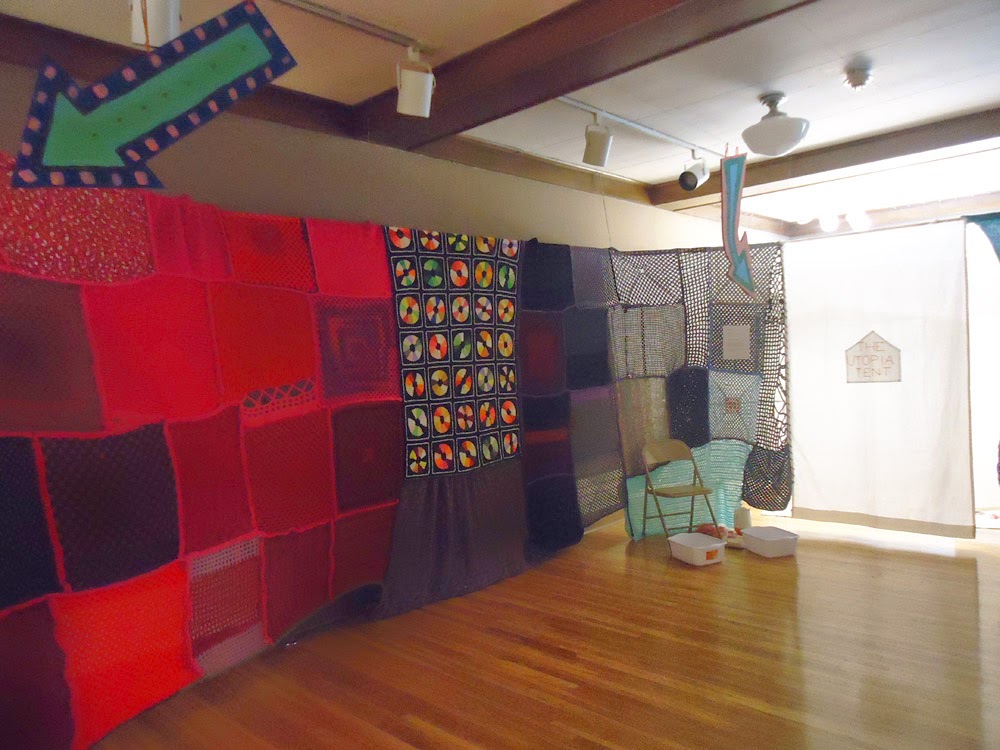 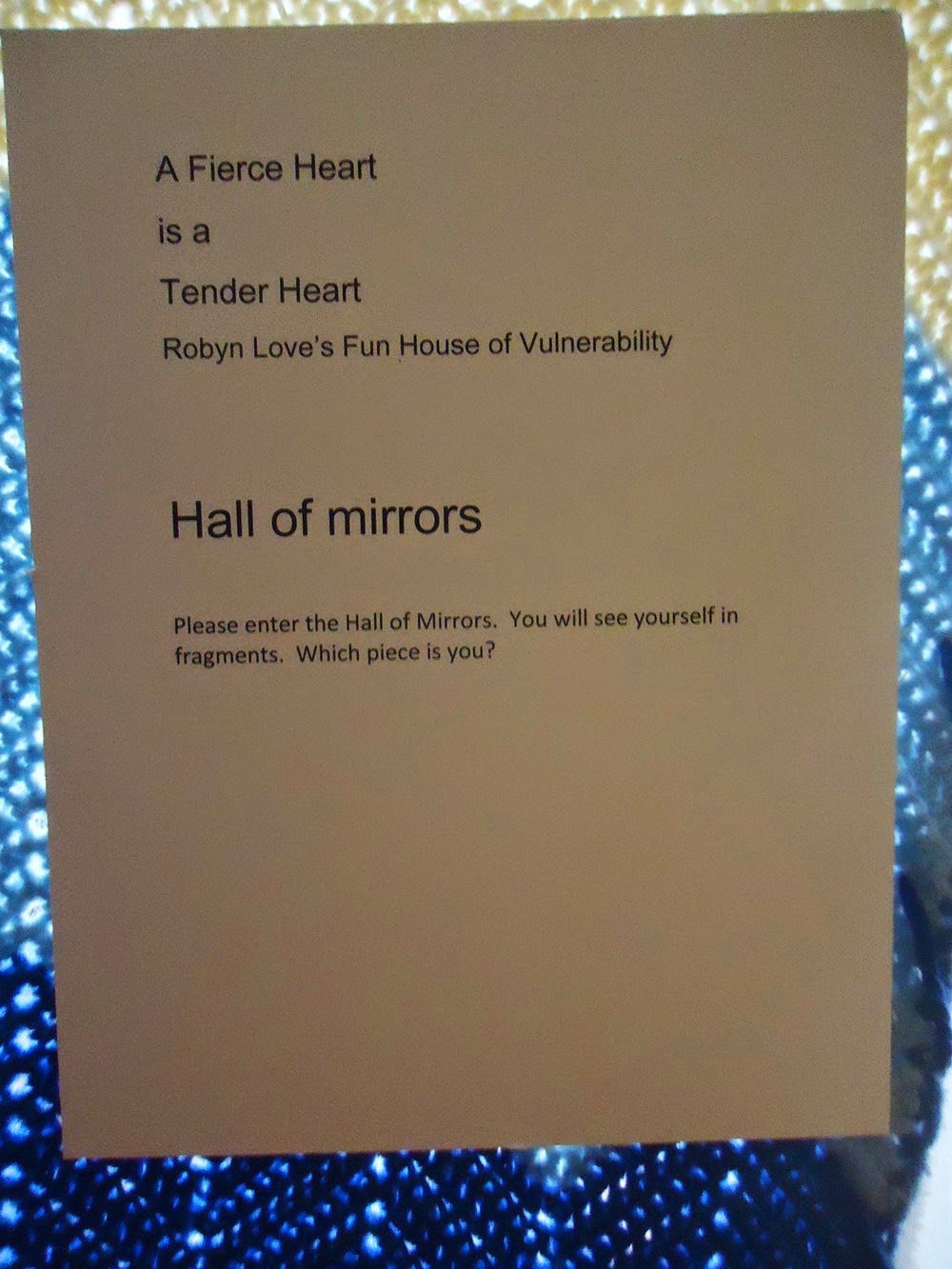 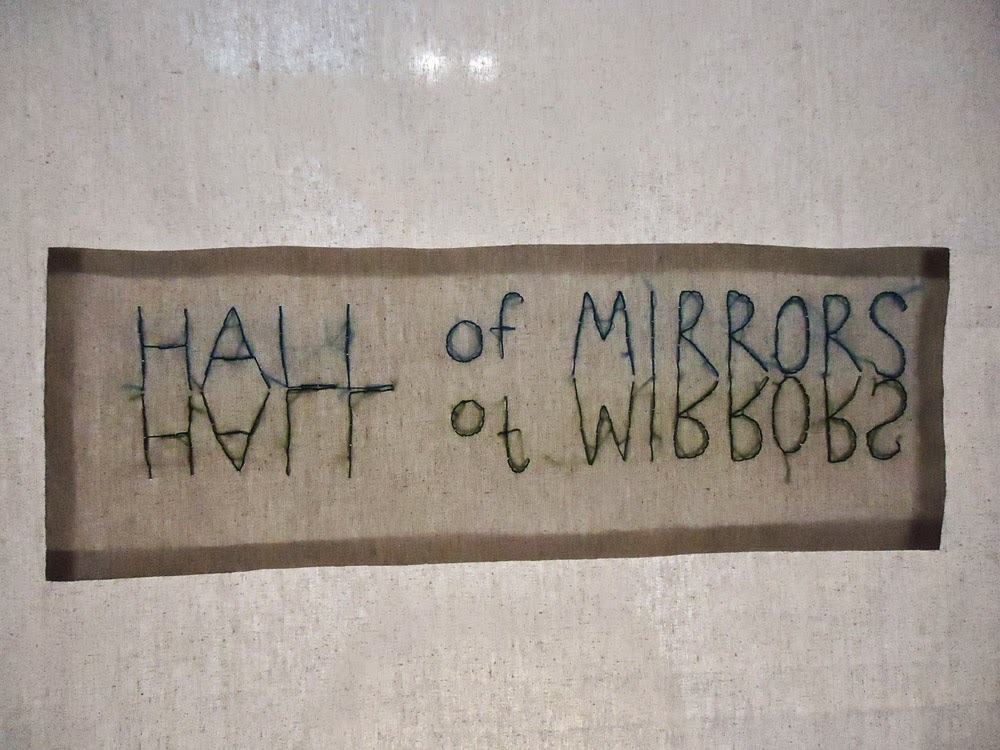 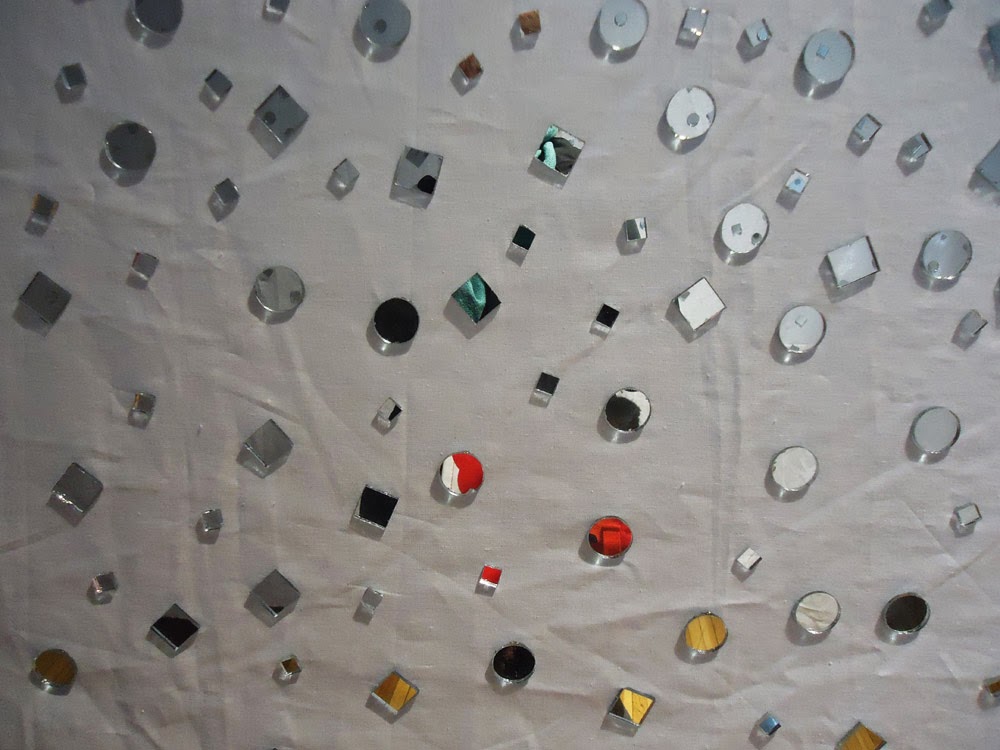 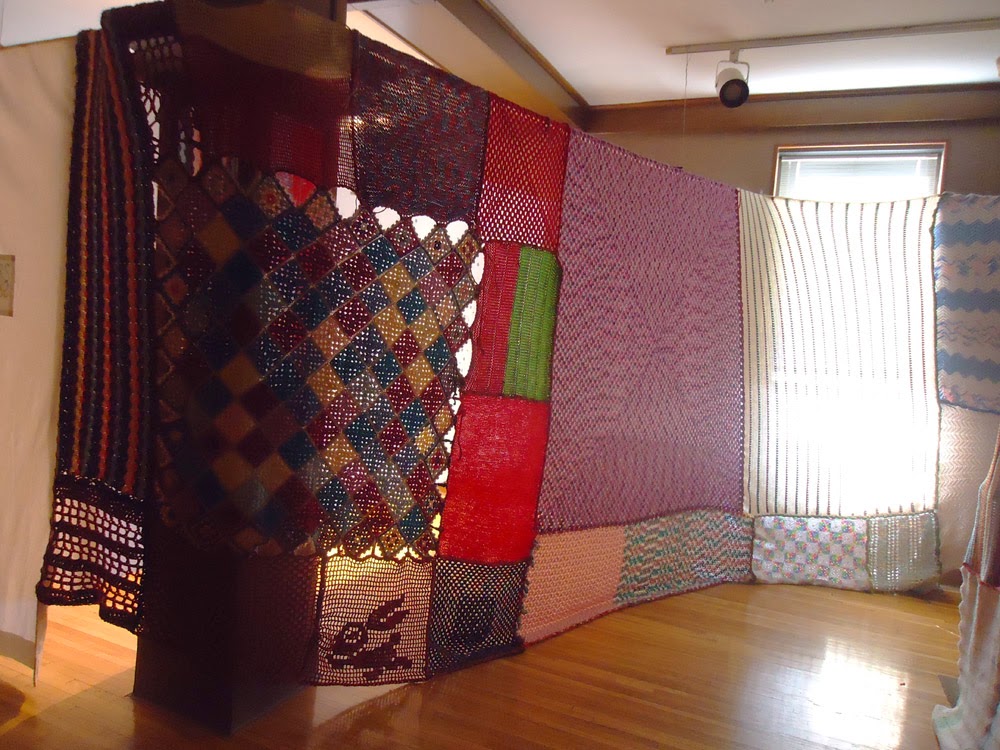 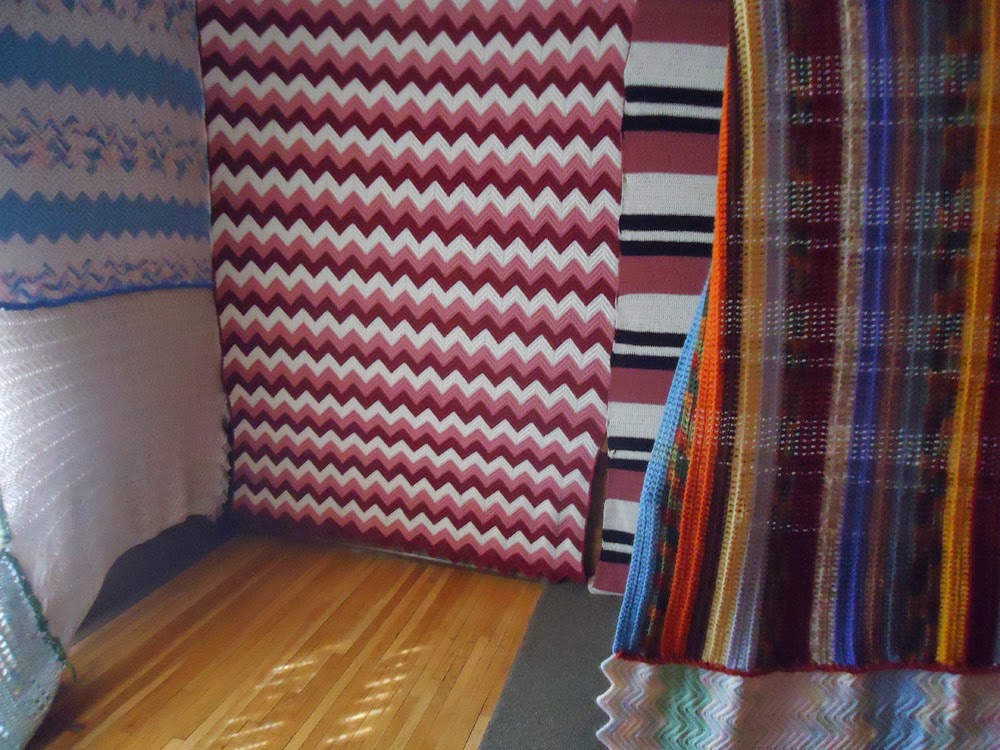 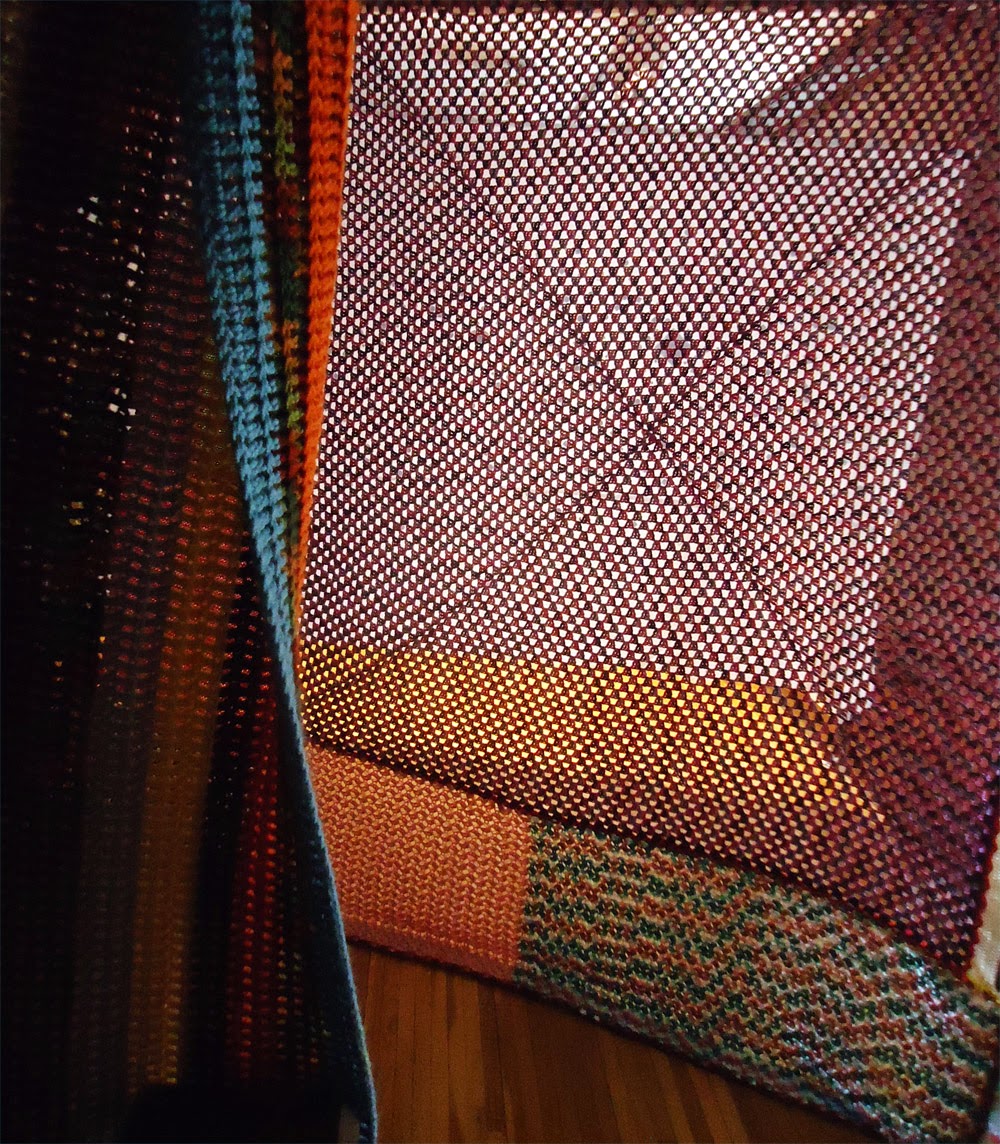 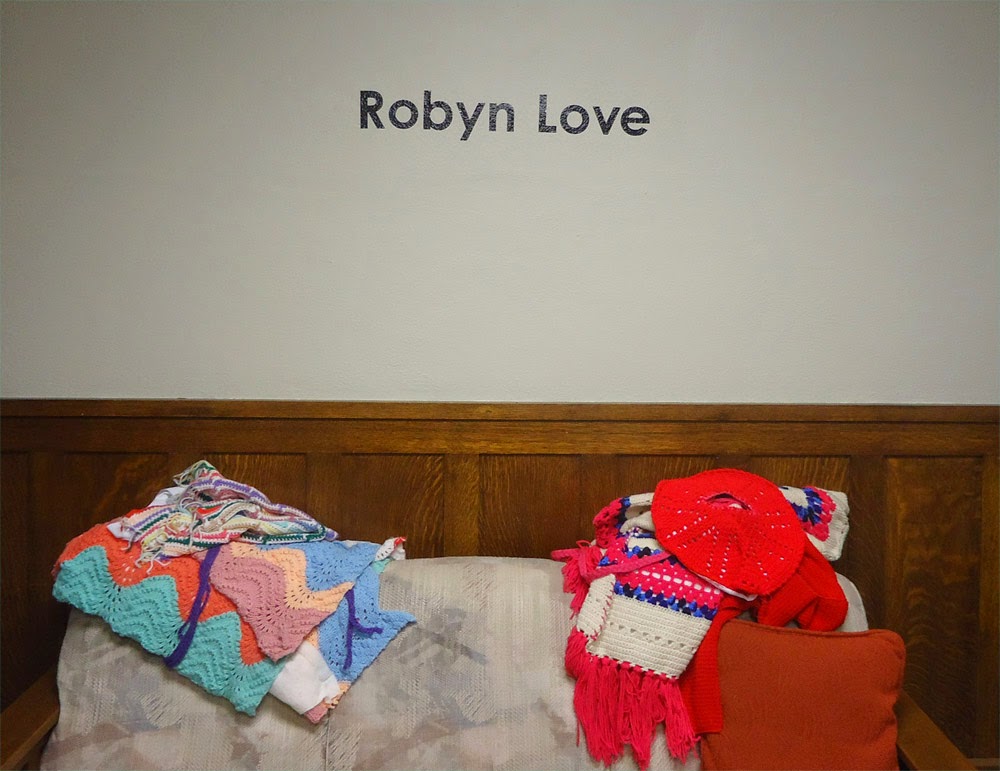 When I was still married, we had a joke that, while some people marry into money, Dan married into knitting.  There was never any shortage of fresh handknits appearing in the pipeline.  On my end, I would say that I married into planning.  I am not sure but I suspect that some members of Dan's family enjoy the planning of various events more than the event itself.  Certainly the planning sessions around events often lasted longer than the event.  This is all fine because people should spend their time doing what they love!

It has been curious for me, however, to see how I fare without the back-up of eight master planners (Dan is from a large family).  I only make lists when things reach a fever pitch and even then, it is with reluctance.  There have been a few times when I realized that I was unprepared for something but, for the most part, things have a way of working out.  Mostly, I am cool with relying on that vague sense that things will continue to move forward whether or not I have a clue how it will all unfold.

So it came to pass that I organized and created a huge installation in South Dakota and it wasn't until I was packing up my stuff to drive out there that I realized that I was going to have to leave my spinning wheel there for several months.  Somehow I just never made the connection.  Throughout the planning and making of the project, I would glance over at my wheel, gathering dust, and think, "soon, baby, soon!"  After all the work was done, I would have no other commitments and I could hang out with my spinning wheel once again.  I never took the next step to realize that baby was on a one-way trip to South Dakota.  Well, at least temporarily.

My wheel is part of the SpinCycle room in the fun house and it is most definitely still in South Dakota as I type this.  I had a little (large) moment of panic - my mind racing to come up with solutions.  Spindle spinning just wasn't going to cut it (sorry).  I actually contemplated buying another wheel although I really didn't want to because (1) they cost a fortune and (2) they take up space.

Yeah, yeah, I know.  First world problems.  I get it!  Still the anxiety of a spinning wheel-less existence was feeling pretty real to me.  The day after I returned, I was bemoaning my fate to a friend who said, "can you rent one?"  Whaa? 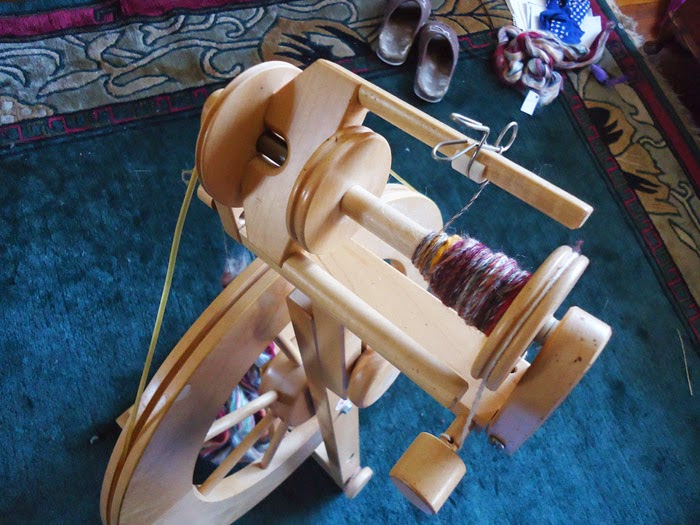 Sometimes the stars align and a complete lack of planning results in just the right thing.
Posted by Robyn at 11:44 AM 1 comment:

Now These Laurels are for Resting Upon

Arrived back in NYC to see that little green things have begun poking up through the leaves from last fall.  I even see full blossoms getting ever fuller on the daffodils.  Can blooms be far behind?

Here is what it looks like in Newfoundland currently:

This was taken by my next door neighbor (there is our little blue house!!) on Sunday.  Another friend told me that her snowbanks are about 15' high at the moment.  So, if you have snowbanks shorter than 15', consider yourself among the lucky.  Spring will come.  I promise.

Other than feeling lucky about the size of my snowbanks, there are yet a few more things are going on here.  One is that I am very pleased to be included in a new project undertaken by a collective in Hamilton, ON, called Pulling Strings.  They are creating a reference library for textile workers based on selections from people they call their "textile heroes".

But what's a hero?

Personally, I consider myself more of a she-ro but, nonetheless, it is an honour to be included.  My contribution, with accompanying blurb was among the first to appear on their blog and will be included in the actual library at Needleworks, a store in Hamilton.

Extra thanks to Tara Bursey for be the driving force behind my inclusion in this great project.