the fair isle pattern is shaping up

I finally finished (sort of) my first section of my 6ft diameter image of Sun City, AZ translated into fair isle pattern. I have divided the image up into eight 200 st pieces that decrease to 45 sts. When all of those are knit, I will be able to pick up all the sts on circular needles and knit the last bit (like the center of the tam) in a more traditional manner.

But how to knit fair isle pattern in flat pieces, you ask? Good question. I have bravely decided that I would rather cut eight steeks than deal with all those purl sts, so each piece will be knit in the round with a steek (decreases on either side of the steek sts), then cut. Will this work? I don't know. 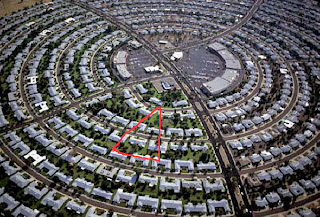 This is the image I am working from. The red triangle is the section I am graphing in fair isle patterning. 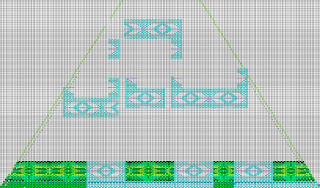 This is the beginning of my graphing out a pattern. I am using a program called Stitch Painter. I originally turned my nose up on the idea of using a computer program to graph the pattern. After spending two days pinning up graph paper (only to realized most of it was not going the right direction), and color in the squares for about 3" of pattern, I realized that I needed to do something if I was going to pretend that I could ever finish this project in my lifetime. I won't even talk about my other original idea of spinning and dyeing all the yarn myself. That was taking my idea of an - ahem - ambitious project just a little too far (esp. considering that, at the time, I did not know how to spin or dye yarn).

I try not to let total absence of skill or knowledge interfere with my ideas...
Posted by Robyn at 6:45 PM

8 steeks? I feel faint. Although if anyone can pull this off, I'm betting on you!

Even though I've only discovered your work through the 'By Hand' book, I'm pretty sure that your skill and knowledge are more than enough to make a masterful job of this! I'm looking forward to watching what happens with it...