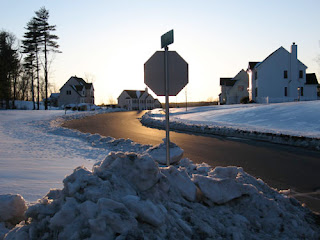 We spent some time up at my sister's house in MA, outside of Boston. She was to be my guinea pig as far as meeting with residents of a new suburban development. In the end, due to (I like to think) school vacation week and FREEZING cold weather, we ended up just hanging out and doing family things. I do wonder if my project description, which my sister emailed to the development's email group along with an invitation to get together and talk about things with me, was speaking in a language that was somewhat foreign to this audience. I will have to work on that, I think.

I did take some pictures and talk with my sister and her husband about the project. She advised me (rather wisely I think) to focus less on the word "sprawl" since it has certain negative connotations. I am not interested in putting people off, in fact I am interested in just the opposite, so I have tried to explain my interest in that which can be called sprawl in neutral words. It was great to be able to spend time there and really absorb the lifestyle, so to speak. It confirms my suspicion that, for this project to result in anything, it will take a good amount of time to generate trust and relationships.


As for knitting...I haven't cast on for the first fair isle piece yet. I hope to do that tomorrow. I have been practicing my two-color technique, which I had never really done until I knit a Bohus for the 2006 Knitting Olympics. 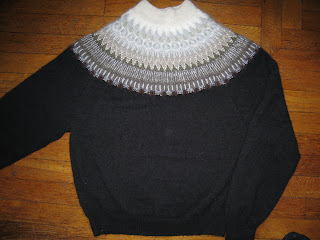 Have no fear, I didn't knit a Bohus in 16 days! It took more like 6 weeks--all that black stockinette stitch!
Posted by Robyn at 6:40 PM

Email ThisBlogThis!Share to TwitterShare to FacebookShare to Pinterest
Labels: sprawl