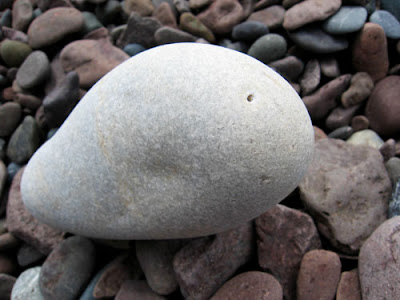 A person I know posted a link on Facebook to an article about how Bolivia was trying to get legislation passed in the United Nations that would give the Earth rights equal to human beings. The person who posted the link was somewhat mocking of this. She later devolved into a George-Soros-wants-to-control-the-world right wing conspiracy theory while her other friends chimed in with notions about "liberal paganism" (Liberal paganism?? Sign me up!).

The main thrust of the conversation, if one can be said to be having such a thing on Facebook, was that some people (and for "some people" read: me) thought that, as a living being, the Earth warranted certain rights or at least an acknowledgement that everything, sentient or non-sentient, was connected and is deserving of respect. Well! You would think I said that Dick Cheney changes into a 27 ft. long lizard at the end of the day.

For suggesting that the Earth was a living being, I was thoroughly mocked and finally called "retarded". That's where I left the discussion.

The whole thing had me amazed. I took it for granted that everyone thought about the Earth as alive but apparently I am incorrect in that assumption. Setting aside for a moment how offensive it is to use that word, is it really retarded to think of rocks as alive? My experience facing a sheer cliff wall of two billion year old rocks in Gros Morne National Park in Newfoundland tells me otherwise.

I suspect there were some underlying religious differences at play in that discussion. For the other commentors, a tsunami or volcano eruption is the hand of God at work and perhaps it is not allowed to imagine a rock or a planet or a universe as a living thing.

When I asked Dan, as our resident expert on Christianity (he took more CCD classes than anyone else I know), what he thought about it, he agreed with the naysayers that rocks were not living but then bemoaned the loss of appreciation for the Christian mystic tradition in favour of I-Shall-Be-First-In-Line-At-The-Gates-Of Heaven fundamentalism. Before I start connecting anymore words with hyphens in this post, what do you think? Is it just mysticism to believe the Earth is alive? Or am I, you know, retarded?
Posted by Robyn at 10:53 AM

You are not retarded. I am probably one of the few, if not only, members of my family who'd say the earth is a living entity. It is not something fundamentalists accept as fact generally. They tend, in my experience, to think of the earth rather like an alternative place to live. You know, if one can't afford a house or a studio apartment or a trailer. Something to use and take care of. Emphasis on use.

lately, i've been feeling more and more estranged from society . . how anyone could NOT consider rock a living entity leaves me . . dumbstruck. and i've tried arguing. it does no good. earth is to be used and trampled until . . humanity gets to a better place? what better place? earth is rather special! granted, heaven must be wonderful, but don't trash the place you're at! (remember love the one you're with?). take care of your body, take care of your world.

there are many nature lovers out there . . but lately the "other" seems to be growing like a bad tumor.

Well, when you consider that rocks brought every drop of water to this planet from space and water is our life, rocks have at least facilitated life as we know it. But if one has ever watched the excellent series, How the Earth Was Formed,I don't see how one can possibly say that the earth is not a living entity. If in fact, the earth was dead, we too would no longer be able to exist on her.